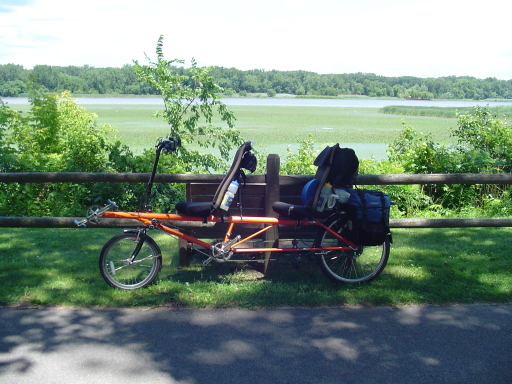 Well it just doesn't get much better than this. Clear blue skies, light breeze, temperatures in the mid seventies, and a great bike path!

We hit the road at 5 am in our trusty old camper. The camper will transport us to Waterford Visitor Center, near the eastern terminus of the network of trails that make up the Erie Canal route across New York. The people at the Waterford Visitor Center are allowing us to park the camper during this tour. We agreed to meet Greg at the visitor center to begin our short tour across New York state to Rochester, NY. We have until Thursday to reach our destination so we are looking forward to 5 days of cycling the Erie Canal.

As luck would have it, there was a nice farmers market / steam boat rally at our starting point. So after parking the motor home and loading up Seemore we headed off down to the canal walk to enjoy the sights. Lots of tempting baked goods and fresh vegetables were available for purchase. We were both still too stuffed from breakfast to even consider purchasing anything.

Greg arrived around 11 am thanks to his son Eric and girlfriend Brie. (what good kids to give dad a lift across state).

We're off! Winding through the downtown area of Cohoes, with a fairly good idea of where to pick up the trail. This will be our 5th time on the Erie canal path and each time we seem to do better navigating our way along. On the path and it's smooth sailing. No cars and the only traffic is human powered. We hit a slight glitch while attempting a climb and the chain fell off while down shifting. Mary made it off Seemore, abandoning ship before he hit the ground. Noel cushioned Seemore's fall. No worries mate, we were almost at a dead stop, and just bruised the captain's ego.

That was our excitement for today. The Mohawk trail is just a joy to ride. There was the usual Sunday bicycle/walker/rollerbaders traffic. From Cohoes until about Rotterdam junction is all paved bicycle path. We stopped to sit on the bench at Niskayuna Park, and cycled downtown Schenectady to visit the farmer's market (which was closing up for the day) Just west of Schenectady we ran into 4 fellow recumbent riders who stopped so we could had an enjoyable talk. Me meet so many nice people!

We are now living large at the Valley View Hotel in Amsterdam. We watch Tiger Woods win another golf tournament, while drinking beers and eating pizza. Life doesn't get much better than this. 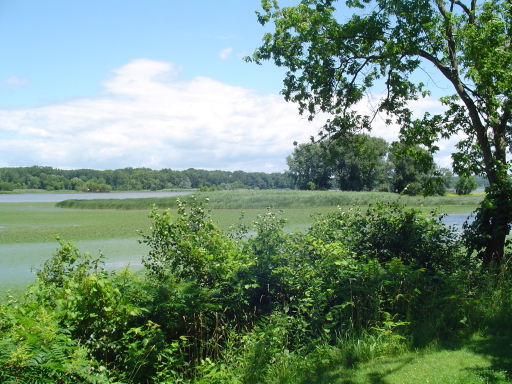