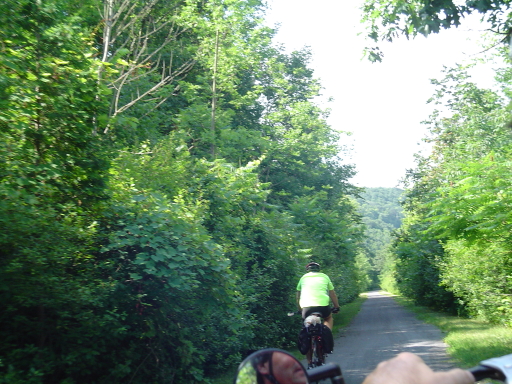 A Bald Eagle, a Ground Hog, and a Revolutionary General

Day 2, and more riding perfection. We started the day at the Hot Ham cafe for breakfast. The cafe is attached to our hotel (The Valley View) in Amsterdam New York. My mom would have loved to have breakfast there, since she is a "pig" collector. There was pig pictures hanging on the wall, pig statues, pigs on the menu, pigs..pigs...pigs....and the food was filling and priced correctly.

Today was a mixture of trail riding, and road riding. Except for the some of the trail being located next to I-90 and some heavy traffic on route 51 (near Utica), it was a very quiet and enjoyable ride today. Temperatures were in the mid 70s, with mostly sunny skies. We rode by many bunnies and wildflowers while on the gravel trail, until we made a side trip into downtown Fultonville, looking for better water (the hotel water was TERRIBLE) and a little admiral break. Things got a little exciting when I tried a little short cut which produced a semi-pudgy rottweiler who gave a little chase.

From there we followed the trail into Canajoharie, Fort Plain, St Johnsville, and through Herkimer State park, which is was the homestead of General Herkimer. The state park is kind of funny, we are not sure how people can get to it except via the canal trail, AND nothing seems "open". The state workers are nice (they filled our water bottles) but we are not quite sure what they do all day.

We had cheese steak subs for lunch in Mohawk, which were very taste. Just prior to Mohawk we watch a bald eagle soaring about the hills around Jacksonburg....WHAT A SITE!

And then there was this ground hog, at first Greg thought it was a stuff "toy" groundhog that some child had lost out the car window during a recent road trip. The groundhog was just stationary, on the road, just four feet from the edge. The closer Greg got, the more the groundhog played "possum". I really thought, at the last second, that he would move and run directly under Greg's wheels....instant road kill (for both Greg and the large rodent). Just at the very very last moment, the groundhog ran into the grass and disaster was avoided. You had to be there, it was really a game of "chicken".

We are now leaving large at the Day's Inn in Utica. Getting here, we "enjoyed" a trip through downtown Utica. Mary's and my opinion of Utica has not changed since our first bike trip through....not a very prosperous section of New York State. 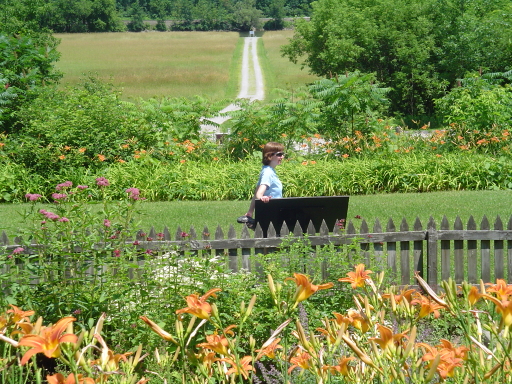