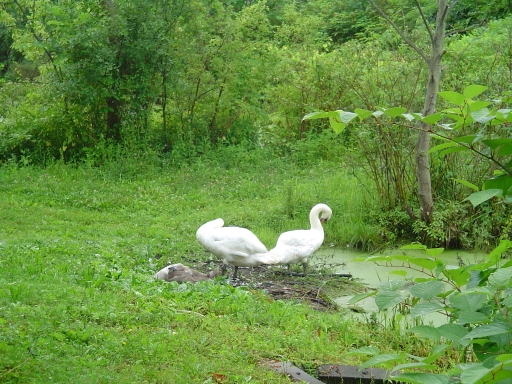 We got wet today. Breakfast was at Friendly's in Utica, before we began today's westerly ride. The trail from Utica to Rome was very enjoyable. We did get wet (about 15 minutes of rain) but this would not be the first time today. After a brief muddy slide in Oriskany, we got to travel on route 365 which is a four lane noise highway into Verona. You by pass Rome by choosing this way, and since we been through downtown Rome....we feel this is a better option. There is a wide shoulder, and you are safe from the traffic...it just is noisy.

While cycling across New York state, you have two choices of routes to get to the west side of Syracuse. We have always opted for the northern route, and still highly recommend staying on Route 31 through Bridgeport and under Oneida Lake. It is (was) a very quiet ride until Cicero. This year we decided to try the Erie Canal State Park series of trail which are pretty much off and on the road until you leave Canastota.

We had lunch in Canastota at an Italian restaurant, and when we got outside....the skies were black and filled with storm clouds. There is a long stretch of the Canal trail starting at Canastota, which takes you 17 miles into DeWitt (East Syracuse). We were dry for about the first mile or so, and then the rain came...and came down hard. SeeMore, Greg, the Rear Admiral, and myself were soaked through. It rained hard for about 4 miles....however.... the canal trail was beautiful! We then had a drying off period, until it rain hard again, this time the skies threw in a little thunder and lighting for some added effects!

This section of the canal trail system is well worth riding, but you next have the joys of riding through downtown Syracuse. To lighten our load a bit, we stopped by a car wash were they kindly let us use a hose to get ride of all the excess mud we accumilated from the trail. The Rear Admiral's legs were also hosed down. We can now put a chalk mark next to riding SeeMore through Syracuse (which means we NEVER have to do this again)....finally after some wrong directions by yours truly, the Rear Admiral GPS(ed) us to a hotel near the state fairgrounds. As Greg and I sat in the vacant hotel parking lot, trading trail stories...the Rear Admiral went inside to negotiate lodging. Only to find out that this huge hotel was booked solid for the night. While inside the hotel, she phoned ahead to the Comfort Inn (about 5 more miles west); and as she got on SeeMore she made a command decision to find the nearest dessert spot. It seems that mud, rain, thunder, lighting, booked hotel, and downtown Syracuse can rapidily get better will a huge brownie sundae, with a cherry on top.

We are living large in West Syracuse, had salad, beer and pizza. I believe we will all sleep well tonight! 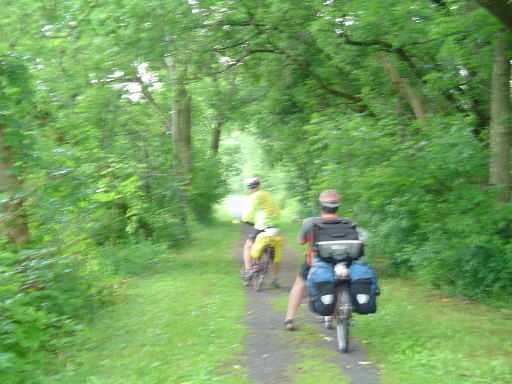