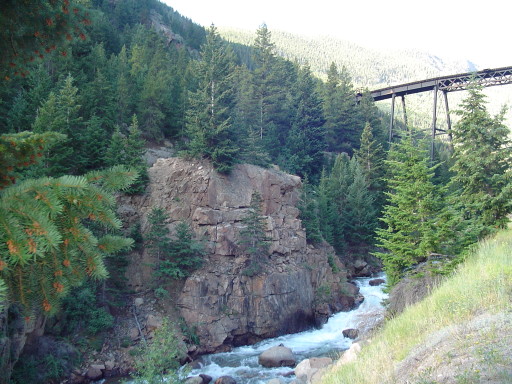 Another pass and Continental Divide crossing (our 14th for this adventure) - Loveland Pass elevation 11,990 feet, mastered by the orange mountain goat!

Continental Breakfast at the Georgetown Mountain Inn consisted of small blueberry and banana muffins, watered down OJ, tea and coffee. It doesn't really cut it if your on a bike, and have a mountain pass to climb over. So we added to this bounty our oatmeal, and we were on the road at 7:30. Even though the Georgetown Mountain Inn is pricey, all in this cycling adventure (even SeeMore) had a great night sleep.

Climbing out of Georgetown you pedal by the Sliver Plume loop railroad on a bicycle path. The mining supported railroad, goes around in a loop to get up to the mine, and we passed under the trestles twice. You can ride the Silver Plume/Georgetown railroad for around 21 dollars. We took the SeeMore express, so we got to see a lot of what you would see from the railroad....but the railroad looks like a fun activity. After the bike path (only a mile long) we followed along Interstate 70 on a service road for 4 miles of quiet and pretty bicycle riding. Then it was 5 miles of cycling on Interstate 70....YUK! Because the Interstate travels through the mountains, the noise of the traffic is amplified. The Rear Admiral and I could not hear each other over the traffic. It was a long 5 miles. Interstate 70 has a tunnel (see Dad there are tunnels through the Rockies) but bicycles are not allowed! Which was fine with us! We exited and cycled on Rte 6, four miles up to Loveland Pass.

We stopped at the beginning of the four mile climb (the climb really started in Georgetown - elevation 8515 feet), to have some snacks and rescue our hearing. While resting, we saw a large yellow highway truck with a snow plow on it.....which made us think a bit. After the break, we climbed the rest of the pass, which featured no shoulder, little traffic, and very kind truck drivers. Trucks that were either too tall or carrying highly combustible materials are not allowed through the Eisenhower tunnel on interstate 70, and had to follow us cyclist up Loveland Pass. WHAT A BEAUTIFUL RIDE!!! Most of our ride up and down the pass was next to the mountain, so we didn't have to worry about pedaling off the side of the mountain. However, the last mile was not next to the mountain, and there was no guard rails.....this is a big no no for the Rear Admiral. Since the traffic was very light, SeeMore stayed mostly in the center of our lane.

After a break at the top, it was down down down....we think the people climbing the pass from the other side had a tougher time. It's always tough to tell, but we did notice all of the cyclist standing as they pedaled (something we can't do on SeeMore). We stopped a number of times on the way down, to make sure the brakes were cool...and to let traffic pass us. We are very grateful that SeeMore has a drum brake (along with our front and back V-brakes). The drum brake is the only way to control SeeMore's speed when going down these mountain passes, and there is no way we could be safe without it.

At the bottom of the pass, there is another bicycle path that lets you get off of Rte 6. The path through the towns of Keystone, Dillon, Frisco, and Breckenridge, most of it along the Dillon reservoir. Dillon must be the sailboat capital of Colorado; not only did we have the mountains to look at, but there are hundreds of small sailboats out on the water this Sunday. The bike path was also well used, and it did go up, down, and was very curvey. I was having a good time pretending I was a race car on the Autobahn until the Rear Admiral correctly reminded me that we are on a fully loaded orange colored tandem.

We are in Frisco living large at the Alpine Inn. We are setting up for Hoosier Pass (11,541 feet). Frisco is a very busy town with a population over the 2,443 according to our maps. I'm not a Frisco fan, but the Rear Admiral got a little retail fix. She even visited a WalMart....I can't remember the last time we were in a town with a WalMart in it. Time to go jump into the hot tub!