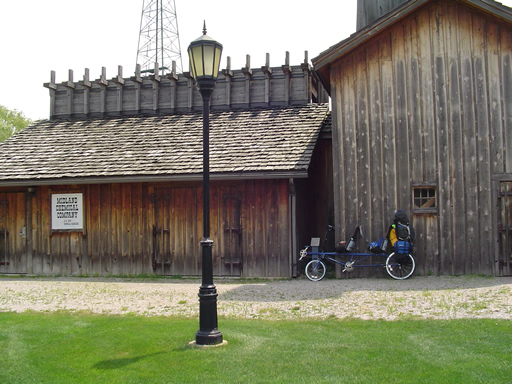 We ate continental breakfast at the Woodyzzz hotel. This did not satisfy the Rear Admiral, she really needs her lumberjack special. So when we got to Bay City, we stopped at the 7-11 for a power bar. Our trip from Caro to Bay City was fantastic. Michigan did not wake up all morning, and we had the roads to ourselves. We rode along flat country roads passing lots of farmland. Blue herons and egrets took refuge in the drainage spillways on the side of the road, so we had quite a show. The Adventure Cycling map took us through the old part of Bay City Michigan, with older style homes and quiet streets. When we got downtown we started to follow the bike trail through town, but it really wasn't very good and we made our own route though town.

The next large city was Midland. This is the home of Dow Chemical, and has a population of 40,000. Dow Chemical is HUGE. We again found our own way through town. In Michigan most of the roads run north to south, or east to west; so it is very hard to get lost. We had lunch at a local diner, and got directions to the Pere Marquette Rail Trail from an elderly couple that was sitting next to us at the diner.

And then there was the Pere Marquette Rail Trail, WOW; this trail starts in Midland and ends 30+ miles in Clare. Smooth 8 foot paved trail all the way! Still in Midland and on the trail, we stopped at the Dow museum. The museum is closed on Mondays, but we were able to explore the outside area, time well spent. There was a lot of activity (bikers, walkers, and inline skaters) on the trail, which we LOVE to see! In downtown Colemen we stopped at Kay's ice cream shop(right off the trail) that set us back a whopping 2 dollars for two very large ice cream cones.

Tonight we walked the town of Clare, and had GREAT Chinese food at Panda's (downtown). 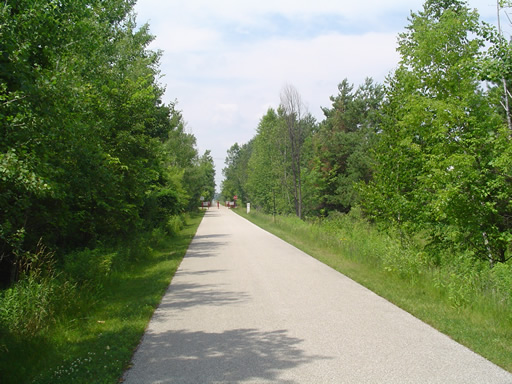 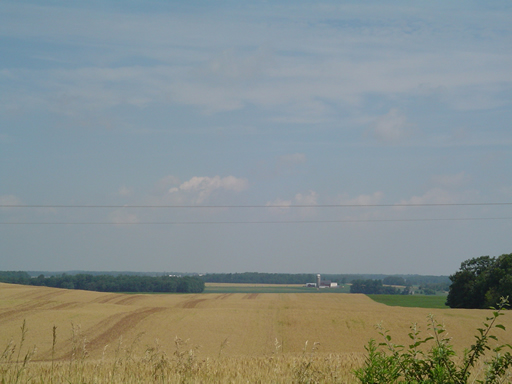 The Rear Admiral did not sleep well last night. With my snoring, trains, DJ playing music until 10:30, being hot, and the normal not-so-quiet camping at the KOA, her energy level was next to zero for the first half of today's trip.

This was a perfect day with temperatures in the middle 80's and sunshine. The wind helped us when we traveled north, and cooled us off when we rode westerly. We zigzagged all day, first going north, then going west. SeeMore is moving like a champ, he and I are having some rear fender discussions; but other than that he has been a pleasure.

After breaking camp, and riding into Capac for breakfast; we rode the next 45 miles into Michigan farmland. The road signs outside of Capac tried to detour us around two bridges that were under construction, but we took a gamble and stuck with the route. Riding a bike has its advantages. The first bridge was almost complete and we were able to cross with only some minor lifting. The other bridge however, was completely gone, but there was a skinny (one person) metal walking bridge over the river. We took the packs off of SeeMore and made it easily to the other side. Because of the detours, we had the road to ourselves for about 10 miles!

We had lunch in Mayville at the local grocery store. The grocery store had a GREAT salad bar, which we took full advantage of. They also had a Subway inside, and we both made Subway lose profit on the diet cola refills. The Rear Admiral's spirits were lifted after lunch. Amazing what a little caffeine will do.

The last 20 miles reminded us of New Hampshire. Some farms, more trees, and very quiet roads filled the afternoon agenda. 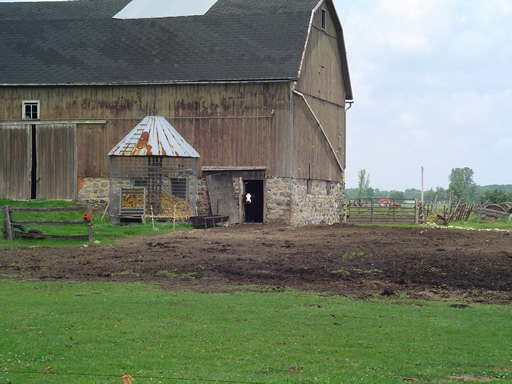 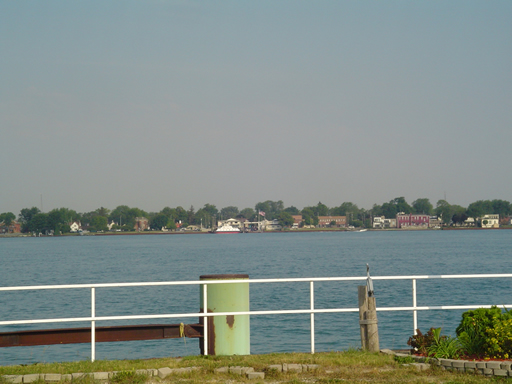 What a ride this morning! We diverted from the Adventure Cycling maps for a few miles so we could ride along the St. Clair River as much as possible (on both the Canadian and USA sides). The St. Clair Parkway on Ontario side was just picture perfect. There were parks with bird sanctuaries on the riverside, and summer cottages on the right side of our view. There was "next to zero" traffic, so we felt like we owned the road. People were enjoying their morning coffees on their front porch, and waving at us as we rode by. SeeMore is quite the ambassador.

We took the Blue Water ferry (2 dollars Canadian per person) across the St. Clair River to Marine City Michigan. The elderly US customs gentleman was kind, and only asked us for our birth certificates and licenses. Again, we have to thank SeeMore for being such a conversation starter. In Marine City, the Rear Admiral DEMANDED breakfast; and I watch her devour her favorite breakfast, the Lumberjack special, at the local diner.

As mentioned, we had rode along the St Clair River instead of taking the bicycle path from Marine City to St. Clair, more car traffic but still great views. In St. Clair we did some banking and visited the library. We talked to a number of people at the library about this adventure.

The rest of the afternoon was spent cycling through Michigan farm country. More twists and turns, ups and downs that made it a tad more interesting. We stopped at the KOA for the night and did laundry. We are not fans of KOA camping but we are traveling during 4th of July weekend, so we take what we can. The hosts at this KOA were fantastic. We believe it was a Grandma, Grandpa, Father, Mother, and kids team.

Two additional points of interest; Amanda (Mandy) and Mike, the young couple who are cycling from Boston to Montana, set up their tent next to ours (I hope I didn't keep them up all night with my snoring!). They had stayed in the same hotel in Wallaceburg as we did, the night before. Also, we tried our first "camp" food. Heated up water in the Jet Boil, and had a gourmet meal of black bean taco casserole with mocha mouse pie. It was really quite tasty. Thank you Dustin and Katelyn for providing your folks with an excellent dinner! 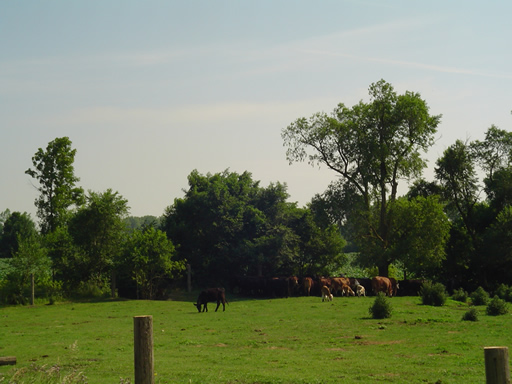