PMC - a ride for cancer

Everyone has been touched by cancer in their lives. We have lost family members and friends to this disease. Thankfully, due to incredible research and innovation at the Dana Farber Cancer Institute in Boston, many are becoming cancer survivors. The PMC is an annual fundraising bike-a-thon with a specific goal: to eradicate cancer. Mary and I were honored to ride for "Team Decco" and the many who gave us donations. 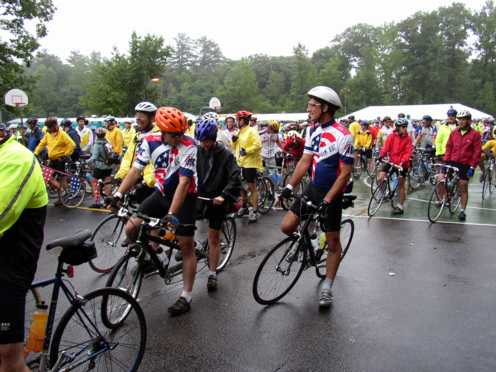 We registered Friday night and found the process very well organized. We were given an ID bracelet that tracked our movement from the start through the water stops and the finish line.

After spending Friday night in Gillette Stadium listing to Bruce Springsteen and the E Street Band, we arrived at Newman Elementary school at 6:15. It was raining and overcast, with temperatures in the upper 60s. Our kids helped get our gear ready and left to go back to the hotel (and more sleep) Clyde lead us to Babson College and the start of the PMC, the rain was steadily coming down but with our rain gear we remained dry and warm.

There were about 2000 bike riders of all abilities, and a number of fellow tandem riders at Babson College. It was quite a scene, we have never witnessed so many cyclist in one place. At 7:30, after stretching, meeting people, and picture taking, everyone lined up for the starting line in three large groups. The experienced cyclist 18 mph and up at the left, the intermediate cyclist 18 - 14 mph in the middle (and the largest group), and the casual riders to the far right. We were to be released one group after another.

Mary was part of team ABC (Associated Builders and Contractors) and I was an adopted member of ABC, because Clyde refused to be split in half. There are 12 members of Team ABC, and 7 members belong in the first group of riders. They wanted all of us to start off together, so Clyde joined them at the start (with a little bit of wariness in his stride). Off we went, under a gray threatening sky. We had removed our raincoats, and would not need them for the rest of the trip. The ABC team was in the back of the elite riders, and the first 2 miles we rode out of Babson in a pack of about 200 riders at a moderate pace. Words cannot describe the experience of riding those first few miles line with people cheering us on. However, the sight of well-wishers did not end at the starting line, during the whole 86 miles, the road had pockets of people cheering us on. Some blew horns, some offered water, some offered support, some saying thanks, some spraying water, and some holding pictures of children that won or loss their battle with cancer. It was a very humbling experience for us.

Clyde usually rides alone, we have our own pace that we go through life. As we reached the 2-mile marker, people began to pass and we pass a few but the pace that Clyde was comfortable was established. Roy, Ivan, and Chris (ABC members) followed us, and we followed them for this journey. Even though we had just a few sprinkles in the first 10 miles, the road was full of puddles and water. Water sprayed like shower nozzles for the bikes in front. Soon our feet would remain wet for the remainder of the ride.

The route was extremely well marked, and at the dangerous intersections the volunteers and police stopped traffic for us. There were 4 water stops spaced about 18 miles from each other. All at schools, offering water, Gatorade, food, massage, bike repair, music, and port-a-johns. Peanut Butter sandwiches never tasted better. For the 4000 riders (2000 riders started at Sturbridge), there was almost 2000 volunteers, and they where GREAT!

This event is a model for fund raising, almost all the funds raised (I believe 92 percent) go directly into the fight against cancer, and it was amazing to see everyone along the way giving of their time and energy.

The ride was beautiful and we rode through state forests, farmland, small towns, and neighborhoods throughout southeastern Massachusetts. About 30 miles into the ride, the Sturbridge group joined us. We had merged with the Sturbridge elite riders (because they were on their 50-mile marker). For the whole trip (except for a very small break) we could see riders ahead, passing, or behind us. At one time 20 elite riders, who missed a turn, passed the 5 of us. I guess if the first rider misses the sign, the people behind him/her just ride with faith. Mary and I yelled, and the last two riders hear us and peel off. They then yelled, and the next few peel off, this continued (I can only assume) until they all turned around. They got back together and passed us again about a mile up the road. All giving Clyde thanks for the "heads up".

The weather turned humid, hot, and SUNNY the last 12 miles of the trip. We rode into Bourne, a large crowd of well-wishers, and the finish line around 1:10. The other ABC team riders average 18.6 mph and where waiting for us. After drinking lots of water, and talking with fellow riders and watched other cyclist finish, we headed back towards the Lindsay's restaurant (our pick up spot) off the Cranberry highway We did not have one breakdown, and Clyde, Mary and myself feel very good, with no soreness. We know we just did a big ride, but feel very good.