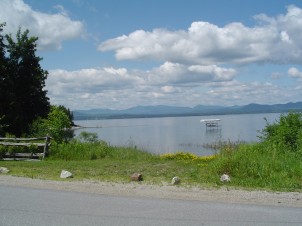 Last night we donated some blood to the Vermont mosquitoes red cross. It wasn't that bad, but they were pests. Because there was a chance of thunderstorms we brought everything into the lean-to. We have self-inflating sleeping pads that work excellent. Mary's hinny was sore today, but I did not get cramps today. All in all, we feel pretty good. We left camp about 8:30. Saw deer, osprey and more farmland during the morning. There were also some pretty expensive homes in the "middle of no where" with the lake as a back yard. Had breakfast at Eat Good Food on the main street of Vergennes Vermont. The name fit perfectly. The owner was interested in Clyde, and asked me all kinds of questions about our experiences. After breakfast we rode into Shelburne and South Burlington. In South Burlington we lost the route depicted on http://www.champlainbikeways.org. Most of the route has been marked with Lake Champlain bike signs, but now there are more routes (and more signs). We just stopped reading the directions, and used the Gazetteer maps we took with us. In North Burlington we met an older couple out for their afternoon bike ride. They lead us down a bike path, and we go going the correct direction. After wiggling our way back and forth, we made it to the causeway and the islands. We did ride most of the bike paths in Burlington; the people of that city are very blessed with some very great places to ride without traffic. The hills of Vermont also disappear in this area. I am writing this part sitting in our room at the Sand Bar Inn, South Hero around 4:00 pm. There is a campground next door so you could choose either. We have a beautiful view the lake. There are about 20 units here, and I think Mary and I are the only ones for tonight. 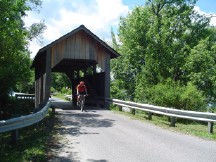 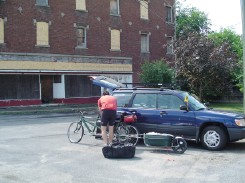 The Champlain Bikeway, a 350+ mile route around the entire Lake and along the Richelieu River in Quebec suggests mostly paved rural roads; however, there are some sections where unpaved roads are used to access superb scenery and services or to avoid heavily traveled paved roads. Within a 50 mile radius of WhiteHall, New York there are many hills. Once you get beyond that radius, the rest of the trip is mostly flat.