From: Fort Plain
To: Cohoes
Mileage: 69


Thursday, July 3 was the last day of the trip. We were in for another great adventure. Mary and I have traveled on the Mohawk River Trail from Cohoes (Albany) to Schenectady before, but we lost the trail in Schenectady, so we were excited to finish the trail. We didn't expect the bonus. We had breakfast at the Hungry Bear Cafe in St. Johnsville. I had the pancakes again, and I didn't need another thing to eat until dinner. Dad and Dustin left us off at the beginning of the trail in Fort Plain. Temperatures would be in the Mid 90s today, under another blue blue sky. The trail was beautiful, and went into Canajoharie. Outside of Canajoharie we had to follow 5S to Fort Hunter, but as we biked along 5S, we saw that the state of New York was about to complete the bike path that will connect (almost) Cohoes to Ft. Plain. 70 miles of trail, three hours from home. . Can you say, "Weekend trips!" We couldn't wait, so we got on the new trail outside of Randall, and road as much of the new trail as we could. We got a little ambitious and a little lost outside of Pattersonville and tried to ride beside the railroad tracks, which gave Clyde another flat tire. Stopping in the Progressive Insurance Company, we borrowed their sink and found the hole in the tube. With fresh chilled water and a patched tube, we journeyed into Schenectady and through (thanks to Harvey Botzman's book). The rest of the trip was pure joy. Dad and Dusting met us exactly at the end of the trail (they literally had the motor home parked on the trail). Thanks to their patience and good humor we could not have had a better trip. Somehow knowing you have a bit of a safety net a soft bed and a warm meal at the end of the day makes the sun shine a little brighter.Total mileage 397, we finished the trip two days early.

From: Bridgeport
To: Fort Plain
Mileage: 88


Another beautiful day with highs in the low 90s. Plan B was to ride the trail until it crosses Rte 31 (bike route 5) until Rte 365 (bike route 5) and go SOUTH of Rome and through Utica. We back tracked a little to the beginning of Historic Erie Canal trail, and we were not disappointed, the trail was AWESOME with a wide packed stone base. It followed the original Erie Canal and was filled with aqueducts, old bridges, kayakers, old culverts and stone works. We got off and traveled on the main roads, which started to get busier and busier. I should have listened to Mary (now promoted from stoker to rear admiral) and turned off at one exit, but the bicycle route 5 signs pointed another direction. This direction lead us right into Rome on a major road. Our faithful tandem, Clyde, had our first flat tire (a metal pin). I tried to patch it, but was forced to stop again a couple of miles down the road. This time I used our last tube and the last CO2 cartridge. Not a comfortable feeling, being on a major route without spares. We got Clyde back on his feet and glanced over the highway to see another tandem riding this major highway (bike route 5?) east to west. It's neat that every challenge has a silver lining. Well we made it through Rome and headed south at lock 20. We got a couple of CO2 cartridges at a motor cycle dealer and were told at the diner in Whiteboro (lunch for the day) that the closest bike dealer was an 8 mile (16 mile round trip) down an extremely bike unfriendly route to the mall in south Utica. If we didn't have the cell phone in our back pack AND Dustin and Dad were not in the area, I would have gone down the route. Needless to say, we pushed on with the encouragement of the Rear Admiral. I feel a little bit sorry for the folks in Utica, their city seems to be fighting for breath, and losing badly. We rode through the downtown section were we had to make a decision, follow route 5S (bike route 5) or route 5 (bike route 5). Confused? So were we. We followed 5S, and should have followed 5 because it was less busy, so the folks at Dick's Bike shop in Herkimer told us. So plan B had turned in the plan xyz?

At Dicks, we had a nice rest and talk with the owners. Seems like bike tubes were a big seller that day. They told us that the State had committed to funding for the bike path to run from Herkimer to the Old Erie Canal State Park. This would be a blessing. We asked him how far Fort Plain was and he answered that it was 50 minutes, by car. This was a kind way of not telling us that this stretch of bike route 5 (5S) was hilly. I knew it would be. The Appalachians extend from Georgia to Maine, and the Mohawk River area is the only natural break in the Appalachians, and they are not devoid of hills. We did very well. Mary also allowed Clyde to reach 41 mph down one long hill. Dustin and Dad caught up with us about 4 miles outside of Fort Plain. We were going up hill, again, and I was kind of looking forward to another down hill blast. But it was not to be. We camped at Crystal Grove Campground that was 5 miles (straight up) north of St Johnsville off of route 5, not 5S. After 88 miles and a few unaccounted for miles in Utica when the captain forgot to turn the odometer on we decided to ride the motorhome back 12 miles to the campsite.

This campground was on the expensive side, but a very nice park. Lots of wooded sites. We received exciting news when we called Katelyn that night. Grandma took her down to Daniel Webster College, and she took her first pilot's flight lesson. She had 1.5 hours in the plane and was allowed to fly and taxi it. Needless to say she didn't mentally come back to earth for a couple of days. 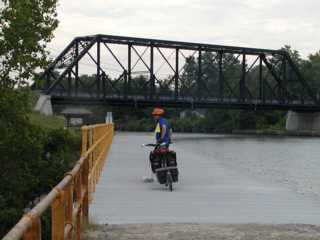 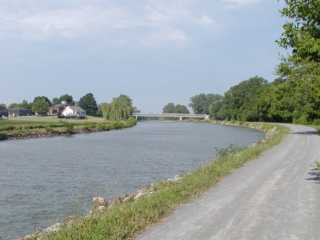