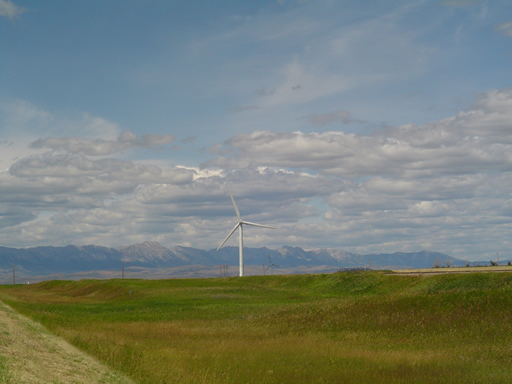 Well we're "officially off route". After breakfast at the hotel dining room which included views of Waterton Lake and the surrounding mountains we began our journey north towards Pincher Creek, Alberta. Using a map from the Waterton visitor center we decided that we would shoot for three major towns on our detour route. Pincher Creek, Sparwood and Fernie, Pincher Creek seemed to be the best destination for today as we did not know what to expect for climbs, wind and services. With the help of pretty good crosswinds from the south and more spectacular views of the Rocky Mountains as we rode north, we arrived in Pincher Creek at about noontime. Route 6 north was not busy at all, and a pleasure to ride.

On the way into town we met a very nice man named Pat Geale. He had pulled ahead of us to take our picture as we went by. His niece is considering a trip across Canada and he was wondering about our trip and bike. He spent many years himself wandering the waterways of Canada he appreciated our mode of travel.

Our first stop in Pincher Creek was to the visitor center to check on rates and recommendations for the local hotels. We had a wonderful visit with the woman there who shared a ton of information about the surrounding area, weather and what it was like to live in the area. Pincher Creek and its neighboring towns are also home to a major Shell oil and gas facility and several major wind plants. It is a very nice, prosperous little town.

After circling the town a bit and checking out a few of the local hotels we decided that it was really just too early to stop for the day, so after lunch we began heading west and climbing Crowsnest Pass. Now there just isn't any getting around it, if your going west and each of the 100 or so wind turbines is pointing west you better just settle in and not fight it. So our pedals spin a little more and our speed drops to about 7 or 8 mph but we still seem to move along. Route 3 has a lot of truck and camper traffic on it, but has wide shoulders. The views from SeeMore, however, were outstanding and there were several interesting historical sites at which we stopped to visit.

The Leitch Collieries was a site built for the Canadian Mounted police when cattle rustling became rampant in the area. Later it was used as a coal mining operation when the railroad moved westward. Not much remains of the site but hollow walls and foundations. Further up the road is the Frank Slide, which was very impressive. Frank was a small coal mining town until one night in 1903 when about 1/2 of Turtle Mountain collapsed on top of it. Today the road runs smack though the center of the landslide, with the exception of the road and railroad tracks, evidence of the slide looks as though it happened yesterday. The Rear Admiral tried to take some photos to capture it but just could not. After a great conversation with a family from Edmonton, there son has a custom built recumbent bike; we headed on up the hill.

By about 5 pm we reached Blairmore, AB and our riding limits for today. We quickly found a hotel and created quite the disruption getting the bike into the room. Bringing Seemore into a hotel is kind of like bring a horse in, especially if it isn't a straight shot to the room. It usually yields lots of questions and meeting new people so not so bad.

While at the grocery store in town we met another touring group doing the Adventure Cycling Great Parks tour. We had just enough time to exchange the basics and were invited to visit their campsite in town. Not sure who looked more exhausted but they had sixteen people to fix dinner for so we will wish them the best of travels and a good nights rest tonight. 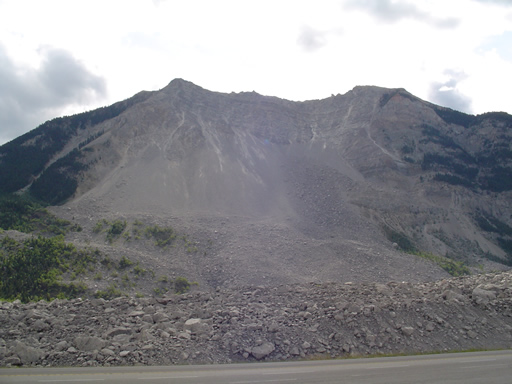