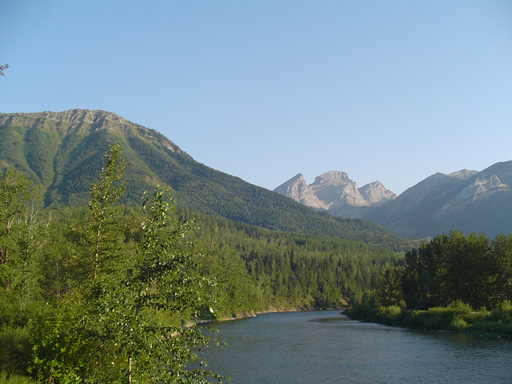 Stellar ride again, we wonder if the people living in this area could ever take all this beauty for granted. As we rode out of Fernie it was pretty crisp, probably about 40 degrees. Two mountain bikers passed us on their way to work at the ski resorts located on the south side of town. Both were in shorts and T-Shirts, where as we were bundled up. Our excuse, all of that hot weather must have thinned our blood. Blue sky and temperatures in the upper 70's followed us as we continued on route 3 traveling southwest towards Montana, and after Elko where we turned south onto route 93. Most of today's riding was flat or downhill except for a climb out of the Elk River valley where route 93 departs from the Elk River. We've seen very little wild life along this route maybe because it is so busy. We passed a roadside turnout that did in fact confirm that there are big horn sheep, moose and bear in the area. Maybe it's best that that they are not down near the busy road.

Again, route 3 was busy but didn't start picking up traffic until mid morning; by then we were close to route 93. Route 93 was smooth, wide shoulders and LITTLE to NO traffic, until the border crossing. It is amazing how much you miss the quietness when you are on the bike. Riding through the Rockies, what more can be said. Trees, river, mountains and rock cliffs surrounded us as we rode.

At Elko we stopped at the dairy bar on the corner of route 3 and 93, basically to watch the amount of traffic turning onto route 93. There was a group of white water rafters gathering for the day, and we talked to one lady about living in this area.

In Grasmere we had some cheeseburgers and fries, It was a little early but we wanted to spend our last 12 dollars of Canadian. Surprisingly, we found out that we were pretty hungry, because we ate rather ravenously.

We sailed through the border crossing, first time that it was as easy to access the USA, as it always seems to be getting into Canada. The afternoon was spent in downtown Eureka (population 1950) and visiting the Tobacco Valley Museum in town. Eureka's claim to fame is logging and the production of mucic acid. Mucic acid comes from larch trees and the best we can figure out is that it is either a type of baking soda or baking powder. 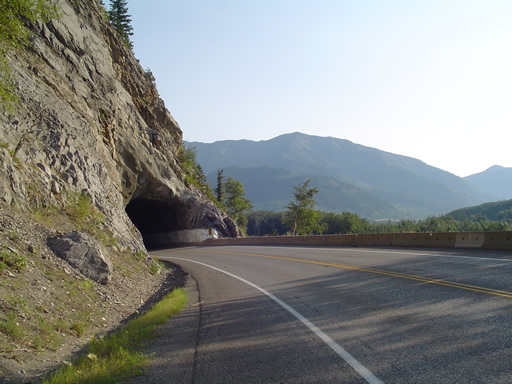