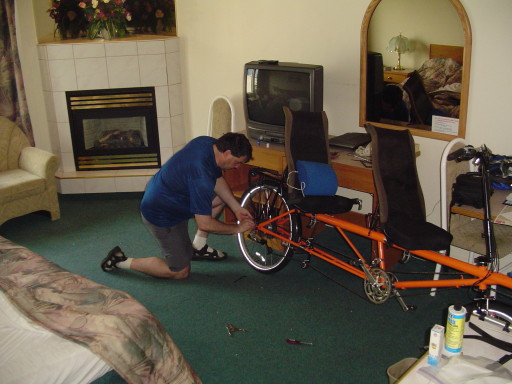 We first want to say some "Thank You"s, we have done them in person, but we hope that mentioning here, were anyone and everyone can read them would a little bit more importance to them.

I need to finally thank all of my friends (both retired and active) for 11 enjoyable years at Milford Elementary. I have been truly blessed, and I will be indebted to you for the rest of my life. The multitude of cards, gifts, letters, hugs and we wishes really humbles a person. Thank you, Thank you, Thank you.


Since we don't believe in bad omens, Everything happens for the best... We are staying at the Budget Western hotel where the manager has been very kind to us, her husband lent us his tools to put SeeMore back together while we waited (our tools are in Bertha our large backpack). The manager of the Budget Western held a room for us tonight just in case we didn't get the rest of our stuff from the airlines. We've had a quiet day reading and building SeeMore and test riding.

We finally received (got word) that around 5 pm the airline found Bertha the MIA backpack, the hotel shuttled Mary back to the airport to pick it up and were able to finish the last finishing touches to make SeeMore whole again. We decided to stay in Leduc for one more night, seeing that is was 6:00 p.m., when our lost backpack, Bertha, finally walked through the hotel door.

All in all were off to a pretty good start thanks to all of our support.