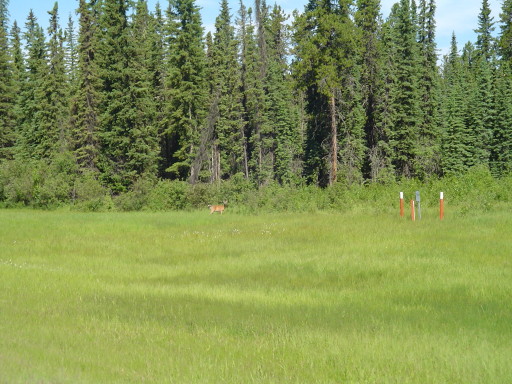 Here is a deer we saw, but it took off to fast to get a good photo.
Blue skies, hot temperature, 4 lane highway, Canadian Holiday weekend traffic, Alberta's booming economy, and trains describe our journey down the Yellowhead highway today. From Wildwood to Edson there has been mostly forested with with spots of ranches here and there. We saw a coyote having his morning meal of road kill deer, and we passed a ranch which is raising bison; but other than that, there were really no Kodak moments. We got honks and waves by motorist, which we return with a wave. Motorcyclist give us the thumbs up. Truckers go out of their way to slow down, and/or move over one lane. All make the Yellowhead more enjoyable.

Today we had a motorcycle pull over in front of us. He was traveling from Edmonton to Jasper and the bolts holding his foot rest were almost off. He did not have the correct allen wrench, but SeeMore did! He could not believe the SeeMore's very small tool section could actually help fix his motorcycle. He was just coming home after an airplane ride.

We are staying tonight in Edson, in a hotel. You can just make out the Canadian Rockies from Edson, which is making our hearts go pitter patter. The Rear Admiral has had enough of camping....actually she is just SO jealous that in takes me less than 5 minutes to fall asleep. Remember, it doesn't get dark until after 11:00, and here I am, in bliss, at 7:30. Last night's camping adventure, Nojack Provincial Park, had two other things not adding aid to her slumber. It is located next to the highway (I just pretend that the traffic sounds are waves, crashing on the Maine coastal rocky shores); AND last night's late arriving neighbors started hammering in their multitude of tent pegs through very rocky soil, just when she was in the zone. She said it sounded like they were constructing a 4 bedroom log home, with dormers, from scratch. I never heard a thing..hehehe.

Tomorrow will be the last day on the Yellowhead. We will reach the highest elevation (3800 ft.) of the Yellowhead, at the most northern point our this journey, then head south towards Hinton. The Kodak moments are just about appear!