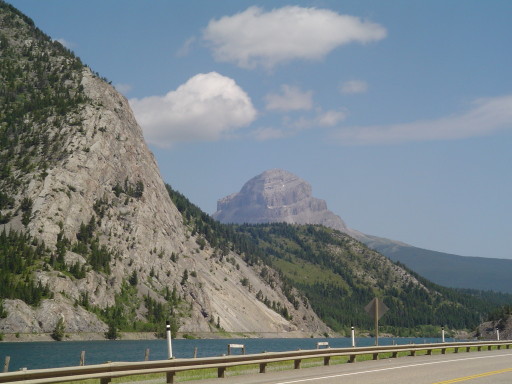 Our first stop was Sparwood, where we saw the largest truck in the world (again)....then went to the local grocery store for some snack food and Gatorade. Then it was up and and across Crowsnest Pass (4,457 ft) which was not very hard at all, except for the traffic and pig trucks...with their odor as they passed us.

We stayed on Route 3 for most of the ride today. Crowsnest Pass (above photo) has a couple of beautiful lakes, and there is a campground on the shores of one of the lakes, which looked very inviting. Imagine at the top of a pass, with a flat valley, full of cool blue water. Very inviting. We noticed on both sides of the Crowsnest pass (BC and Alberta) they have workers trying hard to eliminate the Purple Loosestrife which is taken over. We think it is a losing battle. At the Alberta/BC border we went though the Truck weigh station with all of the other "big rigs" . We weigh in at 22. We're not sure 22 whats but doesn't sound too heavy?

We had a picnic lunch in downtown Blairmore, a town after the pass. After lunch we passed through what remains of the town of Frank. In 1903, half of a mountain came down on the town killing over 70 people. Today both Route 3 and the railroad pass through huge amount of granite boulders. At any natural disaster site, we are reminded how we will never be in control of Mother Nature.

It was then on to Pincher Creek, a simple 27 mile ride, right? In this neck of the woods, they have a thing called the Chinook Winds. Let me tell you, they were blowing. Pincher Creek is BOOMING, because of oil and the hundreds of Wind Turbines they have to take advantage of the Chinook winds (see the below photo). So while we traveled south, we were blown all over the road....and our progress was slowwwwww. When we headed east, we barely had to touch the pedals! Too bad, the first 20 miles were not east bound!

We are here in Pincher Creek, at the Super 8. This might be one of the last rooms available in town AND this hotel is only half completed. We are not sure how they are allowed to have guests, with all the construction left to do on this building. To get up to the second floor you go up a staircase that is just framed - not drywall? Tomorrow we will be heading to Waterton, then Glacier National Park, so don't worry ....we will be back to camping and no internet.