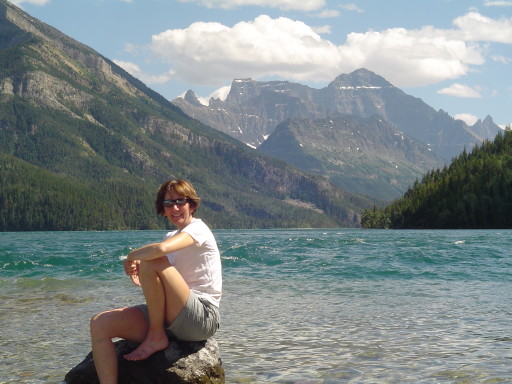 We now have a nickname for our tent, The Prince of Wales II. We are in Waterton National Park, and the wind is gusting from the west. It is always blowing from the west! (here on the east side of the Rockies) We had some very hard miles today. Sitting here watching the Columbia Ground Squirrels (cousins of the prairie dog?), the white tail deer, while we are all in the shade of the snow dotted Canadian Rockies....kinda makes those miles go away.

It's just plan beautiful here! We are under a shade tree, watching the white caps on the lake, and thanking our lucky stars! The Chinook winds were out of the south west today, and yes, that was or traveling direction today. We cycled Rte 6 today, with the Canadian Rockies on our right, miles and miles of farmland, and the wind in command. The foothills go up and down as you ride, and with the wind, you can not establish a cycling rhythm.

We had lunch/breakfast at the Twin Butte grocery store / restaurant (breakfast burritos). If you are traveling by there, stop in, you will not be disappointed with the food or the service. The Twin Butte stop was really the highlight of our day, until we spent the afternoon in and out of the shops in Waterton village and plain sitting around by the lake shore. Well almost, at the Waterton National Park's information house, an old man wanted to feel the Real Admiral's legs. He couldn't believe she could pedal SeeMore all the way from Edmonton! Since his wife didn't mine (you think he goes around feeling other men's wife legs?), Mary said go for it.

Two years ago on our trip across the US, the Rear Admiral and I stayed in the Grand Hotel (Prince of Wales) in Waterton, It was our 25th anniversary gift to each other. At $350 a night, a school teacher can only afford so much so this year we spent $21.50 and set up the tent (The Prince of Wales II). I'm just such a romantic guy! I don't know if the Rear Admiral is being kind, but she says the Prince of Wales II is just as good as the grand hotel on the hill. She must be really tired from the Chinook winds!

Tomorrow we head over Chief Mountain and back into the US. Even though it is not a "mountain pass" we been told it is a bit of a toughie.....we will see, hopefully the Chinook winds will take a day off!