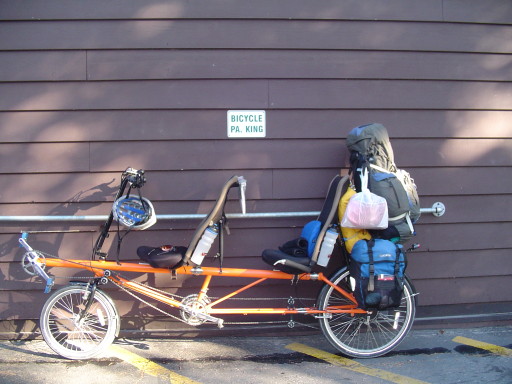 For a change, we broke camp and cycled into West Glacier Village to have breakfast. It was a bone chilling beautiful ride, the last 10 miles of the Going to the Sun Road. Hardly a car passed us (either way) but if they did, you can bet they had their heater on full blast! I think it's wrong to leave the Glacier area without having something with huckleberries on it. So at the West Glacier restaurant, I ordered the pancakes, with fresh hot huckleberries syrup, while the Rear Admiral ordered her lumberjack special (eggs, pancakes, and bacon). Huckleberries taste like a mild blueberry, and I enjoyed my pancakes fully. When we got out of the restaurant, Lavern's Bike Friday was parked next to SeeMore (above photo) in the bicycle parking only space. However, we did not spot him until we were in Columbia Falls exploring the town.

The Adventure Cycling maps take you through back roads from West Glacier to Columbia Falls. They were very peaceful, but there was one section of gravel road (about 3 miles) that SeeMore didn't particularly like. We cycled into and around Columbia Falls looking for a tube for SeeMore's back tire, nothing. Yesterday, on the Going to the Sun Road we experienced a busted value, and had to replace the rear tube. I replaced the tube using the spare that we carry. We did not feel comfortable going all the way to Missoula (140 +/- miles) with just the tube patch kit. What if another value broke, a rare occurrence, but why take the risk? So we made a command decision to head into Kalispell, for a new tube. Navigating by the GPS we found our selves at a dead end by the old steel bridge. We needed to get across the Flathead river but it doesn't look like anyone is going to go over this bridge for another couple of years! Fortunately there was a little park/ boat launch where people were fishing and picnicing so we broke out our deli sandwich and had lunch before backtracking to the main route where we knew there was a working bridge (and alot of heavy traffic).

We are here in Kalispell with a new tube, living large at the EconoLodge. Kalispell is not for me. It is very busy, and it rubs me the wrong way. That's ok, I probably rub Kalispell the wrong way back! Mary likes the old downtown area. You can see many of the original buildings that were built in the late 1800's. Some times you enter a town or city, ride around in it to get the feel....and you find that it's not your cup of tea.

We are off route, and have some options to get back on route. We will see what happens next! That's what an adventure is all about!