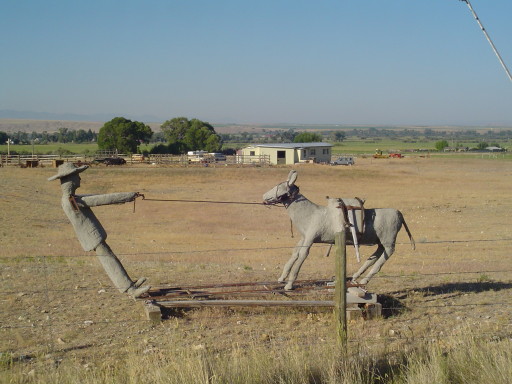 Congratulations Rick and Jennifer! We are truly sorry to miss your wedding!

We had quite an adventure today. We got off on the wrong foot, The Rear Admiral and I were not in tandem this morning as we cycled out of Twin Bridges. The Rear Admiral DID NOT like the cadence I was offering. What she did not understand was that we were experiencing headwinds and a slight climb. I was in between gears, and not too happy....either, too high or too low. The disagreement lasted about 15 seconds. But I just want to state, for the record, that she was right and I was wrong!

During the morning we were on "quiet" Rte 287, and the cycling was great. We spent the late morning and lunch exploring Virginia City. Virginia City is an old (1860's) mining town that at one time had almost 10,000 residences in the hills surrounding Nevada City and Virginia City. It was a treat to look at the old architecture and furnishings, and walk the wooden sidewalk. In the bank/now jewelry store where they still use the original vault, the gentleman behind the counter showed us red garnets that were found in the area (along with gold). There was alot of dredging mining done around here in the late 1800 early 1900's. This type of mining uses a very big dredge which chews along the riverbed spitting out pile of rock and gravel. As you ride along you see this long winding tails of rock mounds. We read a sign stating that some of the gold taken out of this area, actually helped to finance Harvard University? We had lunch in town, chicken hawaiian sandwiches(which were very tasty). And then it was time to climb up out of this valley, and into Madison Valley. The pass had no name (so we named it SeeMore's pass), it was a steady climb to reach 7000 ft. a little steeper then a few others we've done. We made it to the top in about an hour and it was going down is when the adventure really started for today.

It is a very steep drop into Madison Valley, and at 30 mph; SeeMore's back tire blew! There was a rip in the sidewall, we are not sure what caused it. I thought it was maybe the rear brakes, but under close examination...it doesn't appear so. We slowed down, and finally stopped. SeeMore stayed very stable, but still it got our hearts beating pretty fast. We were about 10 miles from Ennis, and had a whole in the sidewall of the rear tire. I patched the tube, and folded up a dollar bill and placed inside, over the hole in the tire. We put everything back on SeeMore and continued slowly down the very steep hill, until we were at the bottom....when the dollar bill trick failed, and the tire popped again, with a really nice loud backfire, BANG! Again I took everything off SeeMore, patched the tube, used duck tape to fill the gap, refilled the tube, and then put everything back onto SeeMore. I have used a lot of "I"s in the paragraph above, but it was a true team effort. The Rear Adminal made the experience painless.

We limped into Ennis and found the hardware store, where they had one bicycle tire left....the exact size we needed. However, SeeMore now has a yellow sidewall back tire.....it clashes with his orange paint job. We just keep telling him, it's a fashion statement. After 3 tire changes, we needed pie! So we went to the Ennis cafe, and had fresh strawberry pie and homemade banana cream.

Tonight we are in the beautiful Madison Valley. The snow dotted Cedar Mountains are on our east (we are traveling south) and this is RICH ranch land. Cameron is so small, it doesn't have a population on our map. The Prince of Wales II is up, and we are looking forward to some much deserved shut eye.