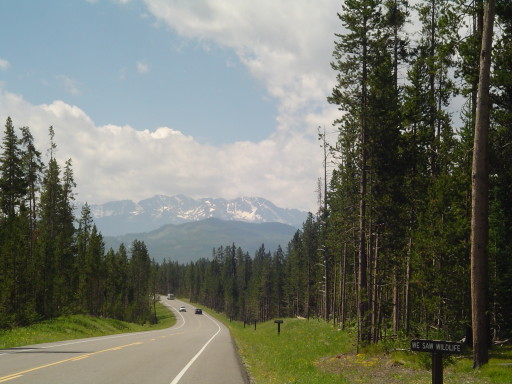 We had an EXCELLENT buffet breakfast at Grant Village after we packed up a soggy Prince of Wales II. We then cycled 20 miles to the south entrance of Yellowstone. Our cylcing found us following along Firehole River and the large canyon it formed. We stopped for a short hike to see some falls, and then crossed the Continental Divide (our seventh time on this trip). After exiting Yellowstone southern gate, we cycled along the John Rockafeller parkway, it seems like there was an explosion of wildflowers along both sides of this highway. What a beautiful ride, and this was before the first views of Jackson Lake and the Tetons.

We then entered Grand Teton's National Park, and there was Jackson Lake and the Teton's. WOW!!! Imagine riding for a couple of hours, with a large lake and snow dotted mountains. The neat thing about the Tetons, is that there are no foothills, the mountains look like grow right out of the lake. The Rear Admiral took photo after photo, and we stopped and stopped. This is one of the Rear Admiral's favorite National Parks.

We stopped in Colter Bay, and set up camp at 2:30, then spent the rest of the day staring at the scenery. Before returning to our campsite, we spent some time at the visitor center. We watched a presentation on the Grand Tetons. It answered a number of questions I have been asking myself. Are the Rockies getting taller, and why Jackson Hole? The Grand Tetons are indeed growing at the same time that the valley is shrinking. The Grand Tetons are getting more impressive with every earth shift in this region! Also, a "hole" is another name for a valley. The first trappers that came west would always call the valleys between the mountains a "hole". So, it is the town of Jackson, which is located in Jackson Hole (along with Jackson Lake). I have mistakely called the town, Jackson Hole, for a long time. Guess who was at the campsite next to ours? Yup, our fellow bicycle tourist Lavern. We never expected to see him again! Here in Colter Bay we are at the hiker/biker sites, which are also clustered together with the group camping sites. It is a beautiful campground and as we set up and dry out it is very quiet and peaceful.

The Prince of Wales II had time to dry out, but it looks pretty good for another soaking. The clouds coming over the mountains are casting dark shadows, and there is a smell of rain in the air. No showers tonight, because of the extra long line at the showers.