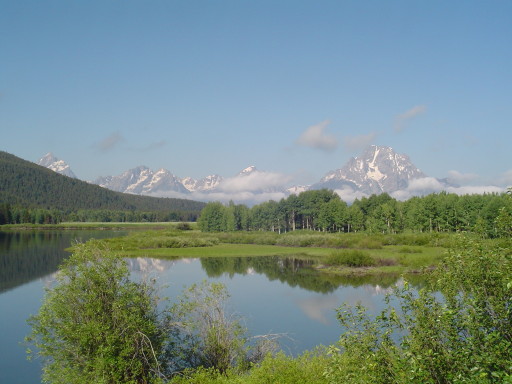 Touring lesson number 157, Never sleep near the group camping sites if you can, especially if a youth group of young energetic teenagers pulls in a 10 pm and have to prepare dinner and wash up after. the Rear Admiral was kept up by all the noise coming from the group sites. As for me...well I was in the Prince of Wales II, it was raining....and it was a dark deep sleep. For the second straight day, we packed up a soggy Prince of Wales II, and headed for breakfast buffet, this time at Colter Bay. The buffet was very good, and priced correctly. Then we cycled the rest of Grand Teton's National Park from Colter Bay to Moran Junction. The Rear Admiral asked for so many photo stops, that I didn't think we would get anywhere today. Which was just fine with me. The scenery was spectacular. Too soon we were at Moran Junction. Next up, 26 miles to the top of Togwotee Pass (9,658 ft.) and another Continental Divide crossing (our eighth for this trip). The elevation in Moran Junction is about 6800 ft.

We have been asked many times if we ride SeeMore up all of these passes. The answer is this: in all the miles we have been with SeeMore, we have only walked SeeMore once, for about 50 feet in Nova Scotia....until the Rear Admiral called me a wimp.....(talk about hurting a man's pride). Today we did not walk SeeMore again, however, today we did "cheat". We weren't given a choice. Due to road construction on Rte 26/287 (they are trying to widen it), we had to ride with Seemore in the pilot truck through two construction zones. At the first flag person, we were told that the construction was 2 miles long and we were not allowed to cycle it. So when the pilot truck came by, SeeMore, the Rear Admiral, and I were hoisted into the back of the white pick-up truck. We gained 300 free feet of elevation as we rode in the pilot truck. At the second flag person, again we were not allowed to cycle. This time we rode in another white pick-up truck (the pilot truck) for an 8th of a mile, gaining 150 free feet of elevation. So can we count climbing Togwotee pass? We will let you be the judge. Togwotee Pass was a steady climb, only a couple of times were we in the lowest gear. The Rear Admiral's main comment was that this was one of the prettiest "non-parks" climbs we have done in all of our riding. I have to agree. Rte 26/287 was not very busy (we expect this to change when the road widens) and we had most of the ride to ourselves thanks to the two major areas of construction. We could tell when the pilot truck lead a group of vehicles, because there would be a line of vehicles....then when they were gone it became very quiet. The views were mountain meadows with a profusion of wild flowers. Nine miles down the other side of the pass, we stopped for a Philly cheese steak, fries, and a hot fudge brownie sundae! Ride...eat....ride....eat.....

We are living large, in a hotel in Dubois, Wyoming. The Rear Admiral's sister Shelia and her husband Alan once called Dubois home . Tonight on the phone we got good advice from them about where to eat, and what to do from them. We promise not to wander too far off the road into the sagebrush during the ride to Rawlins. Living one pedal at a time, putting one foot in front of the other sure feels right, even if you don't have cowboy boots.