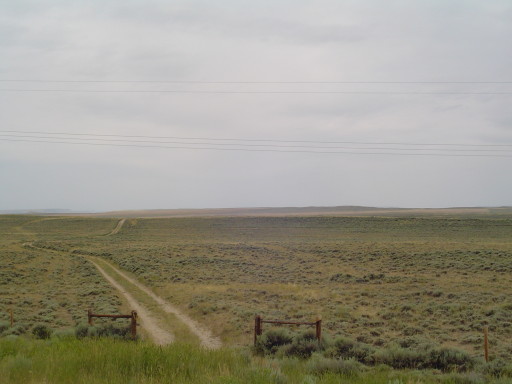 The trees are back!!!

We left Rawlins early, about 7:00, after trying to eat everything the Comfort Inn had to offer (fresh made waffles....yes!). The skies were overcast for our ride all day. We started out wandering the side streets, to the side of Interstate 80 until we got to Sinclair. Sinclair is made up of....a HUGE oil/gas refinery owned by the Sinclair Oil company. The refinery looked to be in full production, and Sinclair's parking lot has seen resent expansion. From Sinclair it was onto Interstate 80, SeeMore's first Interstate highway adventure. This part of the cycling featured vehicles whizzing by at 80+ mph, shredded retread tires lining the break down lane, and hold your nose road kill. We had a number of friendly truckers blowing their encouraging horns at us, which was very much appreciated. The 13 miles of of Interstate 80 we traveled had the same scenery that we have been experiencing since Dubois. So with SeeMore dodging retread debris, boring landscape, and noisy traffic (besides those truckers!)....it was a long 13 miles. We took one relief, by stopping at the Wyoming rest area which was located in the center of our journey on Interstate 80.

We finally turned onto RTE 130/230 (which changes to 230 near Riverside), and it was a pretty quiet ride. Still the same scenery, but pretty quiet. We had crosswinds most of the day, but they were more in our face than our sides. Outside of Saratoga we stopped to look at the remains of the Overland trail (see photo above). Then we approached Saratoga. We began to see strange tall looking green things lining the North Platte River. Could it be? Are our eyes deceiving us? Nope they are real.....the trees are back!!!!

We cycled around Saratoga, and it is a very nice town to spend some time in, so we went to the food store and had a picnic lunch. After lunch our spirits returned to the normal cycling tandem. Again, the scenery in Wyoming can be magical at times.....but it can also be a lot of the same old, same old. After our picnic, we headed towards Riverside and into very powerful crosswinds and liquid sunshine. Just enough liquid sunshine to change your solid colored shorts, into polka dotted shorts. The crosswind slowed SeeMore down, but the sight of trees and green ranches speeded our spirits. About 8 miles outside of Riverside, I noticed that SeeMore's front tire was going soft. Just in time to meet 3 Adventure cyclist going west on the Transamerica. We visited, in the middle of the road, for about 30 minutes. They were very impressed with SeeMore, and he smiled for their cameras...soft front tire and all. Cyclists are so friendly! When they left, I got the tire pump out and filled SeeMore's front tire up. I then checked it about 3 miles down the road, and found out that it was just a slow leak, so we had plenty of pressure when we rolled into Riverside.

Riverside has a population of 58, and the tree lined North Platte runs straight through it. We are at the Lazy Acres Campground and Motel. We opted for the motel, because of the chance of rain and we want to make an early start of it again tomorrow to try and get ahead of the wind. It is an great place to stay, whether you are camping or lodging. The 4 room motel is a trailer full of 70's decor, but very clean. The Rear Admiral says tonight we are having beer and burgers at the cafe in town. I love when she takes command!