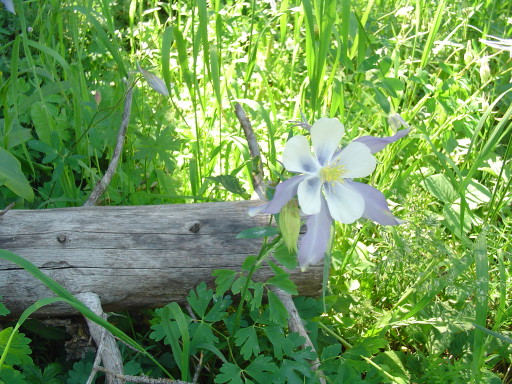 We had oatmeal to begin our day, and began cycling with Bertha (our backpack) and the yellow dry sack staying behind in our motel room. We quickly joined Rte 34 heading toward Rocky Mountain National Park and the Trail Ridge Road. Rte 34 had a wide shoulder, but the traffic was semi busy and we were hoping that it would lessen the closer we got to the National Park. We cycled by million dollar vacation homes, Lake Granby, Shadow Mountain Lake, Grand Lake, and marinas. What a noisy, but gorgeous ride into the town of Grand Lake. We then cycled down and around the town Grand Lake, stopping at a restaurant for our second breakfast. Grand Lake is a small touristy type town, but it is very quaint (per Mary).

The Trail Ridge Road begins at Rocky Mountain National Park. It winds itself through the Rockies and has many hiking trails off of it. We knew it was going to be a GREAT day (besides the 16 miles to Grand Lake) because as we were taking a photo op at the park's entrance sign, the Rear Admiral spotted a moose! A little too far off for a photo, but things were looking up. We climbed and climbed all morning, we had started of at an elevation of 7880, and hoped to reach the park's visitor center at an elevation of 11,796. Imagine traveling at 5 mph for 23 miles with snow dotted mountains on the horizon and millions of wildflowers next to you. Reds, yellows, whites, purple, blues, and orange wildflowers along both sides of the road. The vehicle traffic was not bad, we had a lot of stretches that SeeMore was the king of the road. We also had many thumbs up and also shakes of heads. There is a lot of pine beetle damage, which made the forest look like it was autumn or that a brown forest fire had taken place. We made it up to Milner Pass (our twelth Continental Divide crossing on this adventure) and had a break with an orange and some gorp.

It was then a four mile climb to the park's visitor center, where we lost the trees at 11,000 feet. At the visitor center, we met another couple who ride tandem, and three guys who are doing the Trans America who were quite taken with SeeMore, they were really fascinated with the seats (they must have had sore buts, which I'm sure they did). The Rear Admiral and I both had to use the rest rooms (SeeMore seems to never have to go!), but could not get away from the questions. Finally, we made it to the rest rooms....and then had lunch at the Park's cafe while looking out the window at elk and mountains.

We spent almost the same amount of time going down as going up. We stopped for many photo breaks....and just plain soaking it all in. Close to the bottom of the descent, we spent an hour at one of the rest areas. Neither one of us wanted this day to end! We cycled slowly (on purpose) out of the park, and all the way back to Granby, and just before exiting the park, we encountered some more elk on the side of the road! Three miles from our motel, SeeMore got some more retread wire in his front tire. Because it was just a slow leak, we just filled it with air, and patched the tube when we got back to the motel. We had Chinese food (a first on this trip) for dinner, which was very good! There was some sad news, at 2:30 (while we were in the visitor center) two cyclist fell going down the Trail Ridge Road. We don't know how bad, but it is a reminder that anything can and will happen so ride alert, ride carefully.