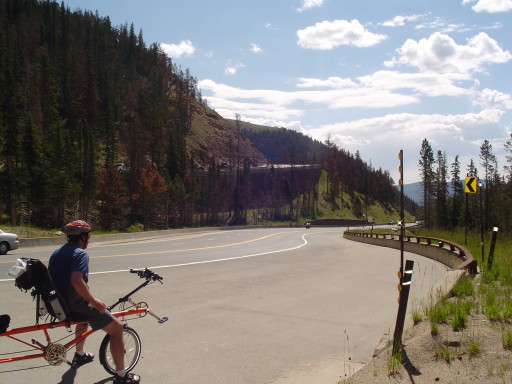 For those cycling from Fraser to Winter Park, there is a bicycle path that takes you away from riding Rte 40. The Adventure Cycling Maps do not mention this path. We cycled some of it, but wished we had rode all of the path. It ends at Winter Park Ski area. We believe the path is called the Fraser River Path.

We both didn't sleep well last night, sometimes that happens...it wasn't the room or the multi train whistles...we just didn't get our sleep. A good night's sleep or not, it was Rte 40 and the attack of Berthoud Pass that filled our morning ride. We had planned an early start, thinking that Saturday morning traffic might be the lightest. We did ok , although the traffic coming from Denver on the other side of the road was heavy, the traffic on our side was minimal. We were a little concerned about going down the pass, because going up (from North to South) there is very little shoulder. We had an advantage of a truck lane on our ride up, but we kept looking at the other side of the road where there was no shoulder. So on we climbed, on our orange mountain goat, SeeMore. We were passed twice by other cyclist, who were decked out in there cycling speedos and riding racing bikes. The pass was beautiful, complete with mountain vistas and waterfalls. If the traffic wasn't there, this would be a great ride. We stopped by a rushing mountain stream, with 1000 feet of elevation left to climb, to take in the scenery and have a snack. Just before crossing the Continental Divide (our thirteenth on this adventure) we got "mooned" by a rather hairy gentleman (why is it always a guy?). We think it was a friendly moon, we also had a lot of thumbs up and encouragement shouted at us on our ride up! Also, as we reached the top of the pass we received a phone call from Dustin to let us know he was able to find a spare tube for the front wheel. Thanks Son, sorry for the gasping for breath in your ear......it wasn't an obscene phone call!

From the top, the rest of our ride was all downhill (10 miles) into Empire Colorado. The south side of the pass was....... FANTASTIC! Wide shoulders, new pavement, wildlife fences, and the embankments were all held back by cement block reinforcement. Colorado and/or the Federal Government spent a pretty penny on improving the south side of Berthoud Pass.

Yesterday while waiting for the Rear Admiral to secure accommodations, a couple (fellow cyclists) came by and hammered me with questions about our orange mountain goat. After a long conversation, they both suggested two great places to eat. Hernado's Pizza in Winter Park for supper, and Jenny's Cafe in Empire, Colorado when the pass was over. They were right on both accounts. We sailed into Jenny's at a little before 11 am. They were still serving breakfast, so the Rear Admiral tried quiche and I had the breakfast burrito (Jennitto). We walked out extremely satisfied and looking for a place to lay down an take a nap!

No nap, but a very leisurely 6 mile ride into Georgetown, our stop for the night. Georgetown is an old mining town (late 1800's), which is now a tourist mecca. It is a historical town much like Virginia City (if you are reading along), the old downtown is restored and now occupied with gift shops and small cafes. We walked and window shopped and walked and window shopped and walked...you get the picture. There is a neat shop for us guys though, there is an art gallery of nothing but trains by the artisit, Scotty.

We are living large in Georgetown, in a hotel (a little pricey). Tomorrow we attack Loveland Pass (elevation 11,990 feet). Hopefully tonight we will rest up.