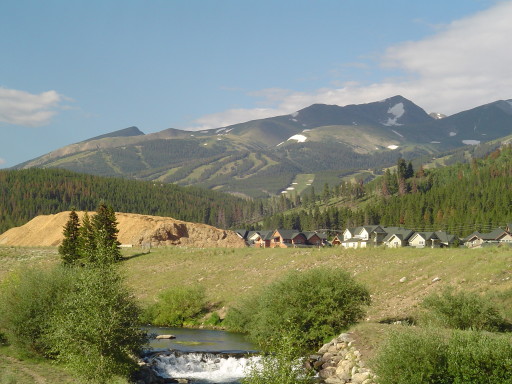 Another pass and Continental Divide crossing (our 15th for this adventure) - Hoosier Pass elevation 11,541 feet, mastered by the orange mountain goat!

We cycled out of downtown Frisco onto the bicycle path which goes all the way to Breckenridge (about 9 miles), what a great way to start a mountain pass. Again we went up, down, and around curves....but this time SeeMore an I behaved ourselves and did not get in trouble with the Rear Admiral. Along the bike path we saw dozens of western bluebirds and a number of humming birds enjoying the wildflowers. Toss in the views of the Rockies, and you have one heck of a bicycle path! There is money in all these towns along the bicycle path, but especially in Breckenridge which is famous for its alpine skiing (see above photo).

We had breakfast at a downtown cafe that ONLY serves breakfast, and you can get it anytime of the day. Then it was time to climb the pass. About 4 miles outside of Breckenridge there was road construction, and a flag person. We passed the 30 vehicles waiting in line, and the flag man told us that the construction was one lane, and only lasted a mile. He then informed us that we were going to lead the pack! Great, here we are at 10,000 feet elevation, going up a mountain pass....and having to go in front of 30 (not so patient) vehicles...one of them as we passed said something that rhymed with "Duck 2" and in another vehicle the driver was enjoying some Rocky Mountain High (so he was probably ok with us passing him). Ok, on your mark, get set....GO, and there goes SeeMore, the orange mountain goat, fully loaded....I think everyone would have been very proud of his 14 mph pace (except for the 30 vehicles behind us,maybe 29!). The Rear Admiral and I donated a lung while leading the pack through the mile of construction on Rte 9.

As soon as it was possible, we pulled over, and let the others pass (and tried to get our hearts back to normal). Then it was up up up, but the pass wasn't that bad. The switchbacks were very short and very steep, but the rest of the pass was quite nice. Because of the construction below, there were multiple times when SeeMore was king of the road (it was very quiet cycling). At the top we took some photos, and then the liquid sunshine began to appear. We put on rain coats, and headed down the pass. The rain did not last long, and the south side of the pass was not steep at all, and it was almost a straight road.

We are here in Fairplay, and I am about to get into some detail about the town's history, so please don't get lost. The original definition of the word park is: A tract of ground kept in its natural state as for the preservation of game and wildlife. Colorado has three large areas that they call parks, and we have cycled through each one. North Park included the towns of Rand and Walden, Middle Park included the towns of Fraser and Winter Park. South Park includes towns of Alma and Fairplay. Fairplay and Alma are gold and silver mining towns which were founded around 1870. Are you with me so far? At the north part of Fairplay is a museum which displays buildings and artifacts of the 1880 - 1910 mining era in this part of Colorado. This museum is a replica of a Colorado gold rush (mining) town (see below photo), and has over 30 buildings which include blacksmith, bank, saloon, school house, brewery, doctor's office, etc. This fictitious town is called, South Park.

And yes you guessed it..... This South Park is related to the very famous cartoon on the cable channel "Comedy Central". One of the original writers of this cartoon series, went to school in Fairplay Colorado. That is how the cartoon got it's name. Aren't you glad your continued to read?

We are in Fairplay living large at the ....wait for it......South Park Lodge. We spent a number of hours at the museum, going into all of the buildings. The museum is well worth the price of admission, if you're in the area it is worth a visit. We have walked up and down the streets of Fairplay, we are not sure if Fairplay is growing or shrinking. There is lots of neat old architecture in the downtown area. We think there might be a "new" part of town to the south of our hotel. Once the rain has stopped we plan to go check it out.