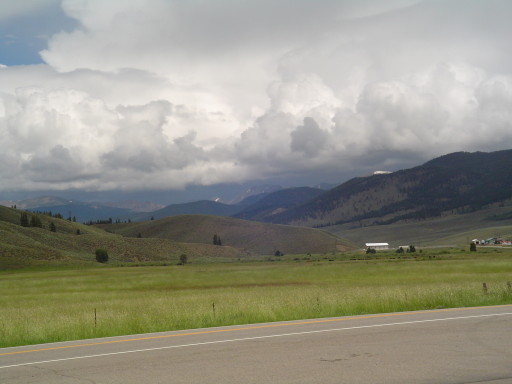 Another pass and Continental Divide crossing (our 16th for this adventure) - Monarch Pass elevation 11,312 feet, mastered by the orange mountain goat!

As you can tell from the above photo, it was over cast all day today. We had periods of sunshine, but our pedaling was done mostly in the clouds. Some of the those clouds were very dark and mean looking. However, we got "spit" on only twice, briefly both times. We feel very lucky to have the overcast skies because they really keep us much cooler than we would be if the "Southwest" sun was beating down on us. We cycled up the pass, at a very steady rate. We stopped in Maysville to sneak into the restrooms of the RV park (thanks to the two very nice ladies from central Texas who let Mary in) then we stopped for a Gatorade/gorp break in front of the Monarch Lodge in Garfield. For those cyclist wanting to break this pass up into two, we recommend stopping here. Rte 50 was ok, there was a little shoulder on the way up and down...but the traffic was minimal. We made it up, and took a break, with phots...then it was down, down, down. The pass loses 3000 feet in 10 miles, and is very curvy (which I love, and the Rear Admiral is not too thrilled with). We did get into a little trouble near the town of Sargents (10 miles down). There were 4 trucks (one of which was a wide load), huge wind gusts, SeeMore, and 8 inches of shoulder which all decided to meet at the same time. Luck for us, a patch of gravel shoulder, 2 feet wide, magically appeared. Unlucky for us, it was soft sand...and the Rear Admiral made a command decision to use her drum brake.

We have an open communication going on, when we decend a pass. When to use what brake, who is coming up from behind, what is ahead, road condition, etc.; trying to make the trip down a pass the safest possible. Putting on the drum brake, without telling the captain (who is trying to pedal out of a situation) is not part of the plan! The left leg of the captain got a unexpected jolt, when trying to push forward...SeeMore wobbled...but did not go down...and we made it through...but not smoothly. Less then a quarter of a Mile, the Tomichi Bar and Cafe appeared, and we hustle SeeMore under the covered porch as the sky opened up! Once again we remain dry! I don't know why we have such great luck staying dry, but we thank the powers that be. We had an enjoyable lunch of hamburgers, and finished as the rain finished! The rest of our ride today was mostly down hill into Gunnison. sneaking through the rain clouds. At one point we did put on all of our rain gear which was totally unnecessary. We can claim that this journey is more complete, today a bee flew up my shorts and decided to use his stinger. So the Rear Admiral has lost one pair of sunglasses, and I had my bee sting!

After the pass, the shoulders on Rte 50 are WIDE, and it was a great ride into Gunnison. We are in Gunnison, living large in a hotel room. We plan to do laundry and go to the Safeway for some dinner. Tomorrow we cycle towards Montrose, where my parents are staying in their motor home. We heard from Dustin and Lauren and they are headed our way. Hopefully they will catch up with us either tonight or tomorrow.