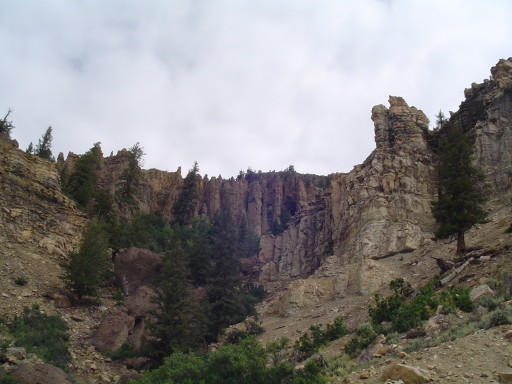 Last night our son Dustin and his girlfriend Lauren caught up with us in Gunnison. They flew into Denver on Tuesday and spent Wednesday in Colorado Springs visiting the Cheyenne Mountain Zoo and the Air Force Academy. After sharing breakfast this morning with the kids in the a.m. SeeMore, the Rear Admiral, and I cycled off on Rte 50 and they drove their rental car in the same direction.....just going a little bit (ok a LOT ) faster than SeeMore. Just up the road from Gunnison you enter the Curecanti National Recreation Area. You start off cycling through a beautiful canyon until you start riding along the Blue Mesa Reservoir. There were many places for picnic/rest areas, which means that we didn't have to look hard to find a Little Admiral Room. Rte 50 had a wide shoulder, and the vehicle traffic was not bad ALL day! About 12 miles outside the town of Gunnison, I reached behind my seat for my water bottle....and realized that we left our water bottles in the hotel room's refrigerator! No big deal, a quick cell phone call...and Dustin and Lauren to the rescue. They were just a couple miles up the road. So they turn around and drove back to give us 4 bottles of water.

We stopped at the Elk Creek Visitor Center to ask questions about the park - Black Canyon of the Gunnison. We found out that you can view the beginning of the canyon (from the bottom) by visiting the Morrow Point Dam. We then cycled until we crossed the Reservoir twice on bridges, we had a snack break at the Pine Creek Visitor Center, overlooking the reservoir and then cycled up to the top of the Blue Mesa Summit,. The mesa has two peaks so after the first climb you descend a couple hundred feet then climb again before heading down through a spectacular canyon. For a couple of magical miles we pedaled through the canyon (this was the only place on Rte 50 that had NO shoulder!), and zero vehicles passed us! Unfortunately there was no where to pull over to take photos, so we will have to save it in our minds. We met up with my parents who drove up from Montrose AND Dustin and Lauren and decided to have a picnic lunch at the Morrow Point Dam. After a short 1/2 mile drive from the Cimarron Visitor Center down to the Dam, you are at the start of the Black Canyon. It was spectacular. The rail road used to go through this canyon and a portion of the old rail road trestle rises up out of the canyon with a train perched on top. There are hiking trails down into the canyon. If only we had more time, it would have been a nice to check a trail out.

After lunch, Mom and Dad headed back to Montrose, Dustin and Lauren headed to the National Park, and SeeMore headed up the 5 mile climb to the the top of Cerro Summit. The climb up was a little wet (liquid Sunshine) but very mild cycling. The rain was not even enough to make it worth while for us to put on our rain coats. From the summit to downtown Montrose is 15 miles....and we did not have to pedal, it was all down hill. We sailed into Montrose just as the skies were about to open up. Mom helped Mary secure accommodations at the hotel located just behind the campground that Mom and Dad are staying at for the month of August. We had hoped to camp at the campground but the storm is here to stay for the evening.

We are here in Montrose, living large at the Best Western. We are going to give SeeMore a well deserved rest until Wednesday. We will head down to Mesa Verde and Durango with Dustin and Lauren in the car and be back in Montrose Sunday night.