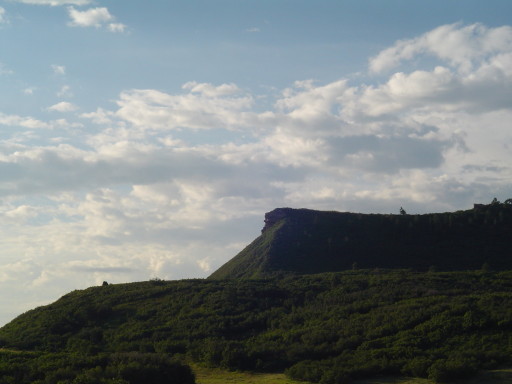 We think the State of New Hampshire should buy this piece of Colorado...then they have their state symbol again! (see above photo)

The San Juan Skyway heads towards Durango on route 160, and so we followed along. Some of rte 160 reminded us of our home in New Hampshire as we cycled through the evergreens and foothills. Route 160 is NOT quiet, but has a wide shoulder for most of the way. We had to climb up to 8400 feet (from 7100 in Mancos) into the foothills of the Rockies. We got up early, because we had a lot planned for today...so we rode as the sun rose and peeked in and out of the clouds. After the small town of Hesperus you begin an 8 mile down hill journey that drops you 2000 feet into Durango. You cycle through canyons, eagles, evergreens, and beauty. Not a bad way to finish a tour!

At the intersection of 550 and 160, you have to make a left turn to get to downtown Durango. We made it to 2nd Avenue Sports, where they did remember us from last week...AND saved us a nice wide bicycle box for SeeMore. Now image this: A fully loaded orange tandem recumbent bicycle, walking down main street (and later, the beautiful bicycle path) with a bicycle box perched where the Rear Admiral usual rides....and two cyclist walking along side. (This is the only time this trip we did not ride SeeMore). We had just under 2 miles to walk to get to the UPS store. Unfortunately it was along the Animas River bike trail....because ....... WE WANTED TO RIDE IT! Another time....

There is a bar next door to the UPS store which has a nice overhang, and lots of room to work. I began taking SeeMore apart, while the Rear Admiral visited Office Depot for bubble wrap and tape. During our "taking apart", we had two hail storms and one big rain storm....we are very lucky to have the protection of the overhang! We worked as a team and had him almost ready to box up, when the bar opened up (1:00 p.m.) and the owner was not very appreciative that we were using the front of her fine establishment (read dump here) as a bicycle repair shop. We assured her that we were almost done, and within 15 minutes we were done. SeeMore, Bertha, and a lot of our stuff is on their way to Milford. We found it cheaper (an we think safer) to trust UPS with SeeMore and Bertha rather than United Airlines.

We are living large at the Comfort Inn. Our plane leaves on Monday out of Durango. The best part is that Mom and Dad will be down tomorrow to visit Durango with us, and then take us to the airport on Monday! We will be writing a conclusion in a bit...but for now the pedaling as stopped, SeeMore is packed up very nicely heading home, and the Rear Admiral and I are truly blessed.