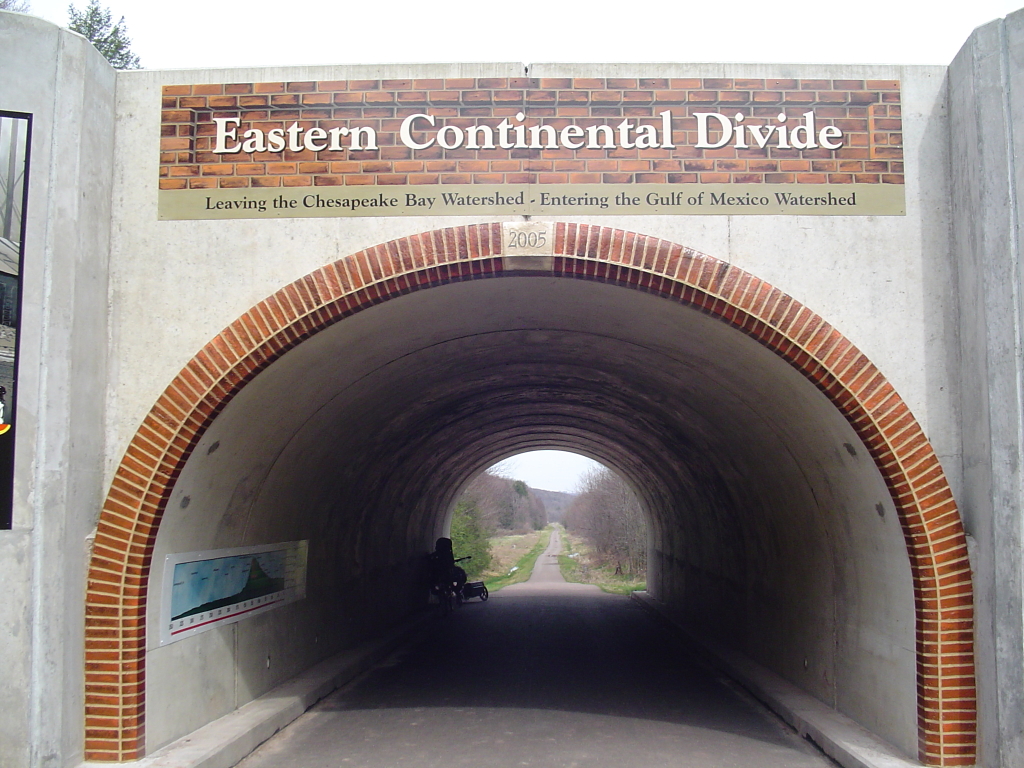 It was a LONG drive down from New Hampshire. Especially from Worcester to the Pennsylvania boarder. In some section of this I felt like I was part of a NSCAR race, in other parts I was in a huge parking lot. The longest of these parking lots was the 5 miler in Hartford.

For the ride down, I purchase a book on tape to listen to from the used bin of our local book store. It is made up of 10 cassettes, and the first 6 run very well. Tape seven is bad, and I couldn't hear the story on either side. Oh well, it kept me company.

I quietly pulled the camper into the trail head parking lot at 1:30 in the morning. At the far end, Dustin and Greg were asleep in Dustin's pickup truck. Meyersdale is famous for three things. One, the Dollar General is open at 1:30 in the morning, since Meyesdale is a bustling metropolitan community with a population of 2,400, I think that it is important that this fine retail establishment would be open late on a Friday night..... The second item that Meyersdale is famous for is maple syrup, so I had some in the morning with my pancakes. The last is trains, trains, trains, and more trains which run through town 24/7, every 15 minutes. Two or three trains sometimes run through center of time. It's a Meyersdale law that the need to blow their whistle hard and long, while going through town.

We headed down the Great Allegahy Pass (GAP) Trail under cloudy skies with temperatures in the 80's. We met few other trail users along the trail from Meyersdale to Cumberland. You climb for the first 6 miles up to Savage Tunnel, if you want to call it climbing (it's very gentle). We past across the Eastern Continental divide, where on the east side, water flows to the Atlantic, and on the west side it flows into the Gulf of Mexico. Then a fun ride through the well lit, Savage Tunnel. From the Savage tunnel, it was a downhill coast into Cumberland. You start a 2,400 elevation at the Eastern Continental divide, and 25 mile later in Cumberland the elevation is 600 feet. The trail mainly travel directly next to railroad tracks, which are active, but we did not see or hear a train. The GAP is very well maintained, with hard packed crushed stone.

In Cumberland we stopped into the National Park's C&O Canal Visitor Center, then had lunch at the Crabby Pig, outside on the patio. We had plan to stop in Cumberland for the night, but kept on riding. Why not, with wild life, flowering trees and wild flowers, and the beautiful canal trail. Greg and I rode side by side for 95 percent of the ride today. The clouds disappeared, and the temperature reach 90 degrees. Maybe it was first day excitement, but we pasted campsite after campsite.

It was about 2 pm when we detoured from the path into the town of Oldtown. We were looking for a convience store which was listed in Greg's book about the C&O. We saw a hand written sign for food and drink, and we took a right. Rode past the Oldtown school and about a half mile out of town into the Maryland countryside. Not seeing anything, we turned around. Looking closer at the school, we notice a cafe sign. The last High School graduating class from Oldtown was in 2000. The community now uses the school as a cafe. The school itself looks like time stop in 2000. Where the students of Oldtown once ate their school lunch is now a make shift cafe that is open from 8 to 8 daily. Dustin and I had some peanut butter pie that lady said would force us to come back again. She didn't realize that I am an expert on tasting peanut butter pie, and although it was tasty....I wouldn't pedal out of my way to have another slice.

After our break in Oldtown, we continued looking for a campsite on the trail. We past a couple of them, but we were not ready to stop for the night. We finally agreed to bike into Paw Paw West Virginia (a mile of the trail and across the Potomac) for pizza. Then because the boy scouts have taken over the Paw Paw campground, we rode through the Paw Paw tunnel....well walked through. Greg led, and Dustin and I rode through half of it. But after hitting the side of the tunnel for the fourth time, and the fact that we couldn't stop laughing...and followed Greg's lead, and walked.

We stopped for the night just east of the Sorrel Ridge campsite (which was full of tents!). We set up the tents with a commanding view of the Potomac, and had some celebratory beers.