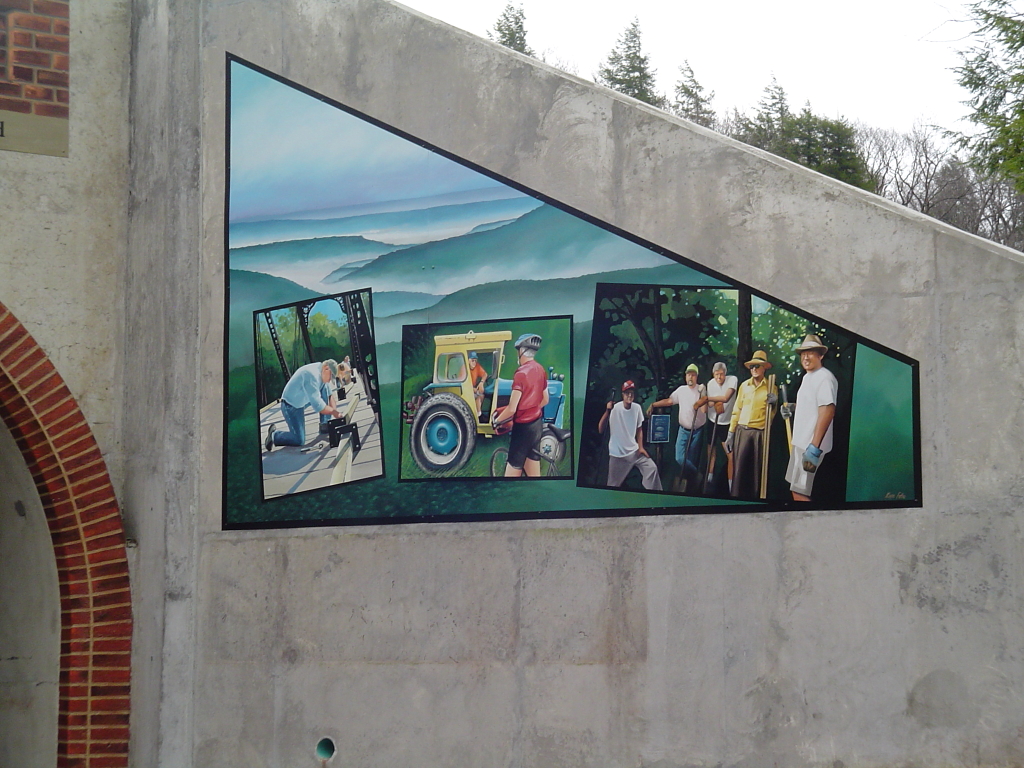 The boys were up late today. When you push loaded touring bikes through mud and rain, you earn a sleep in. I got up early, and searched the web for the local weather. I learned that today's weather was going to be mostly cloudy until the afternoon when the skies were going to produce that four letter word. It didn't look good for tomorrow , nor Saturday.

We were in great spirits as we packed up the hotel room from the tornado that occurred last night, and headed down Central street to Joe's Aqueduct for breakfast. Dustin continued his eating spree, with two orders of French Toast. Greg and I are no longer suprised, but Greg has made a new rule. Dustin is not allowed to cycle the day of, or the day before he is invited over their house for dinner!

This morning's ride featured the climb out of the Potomac river valley. Remember that easy ride down from Meyersdale on day 1? Well what goes down, must climb up. I believe that Greg remarked that we average a whopping 6 mph during our 25 mile ascent up Savage Mountain. The climb was not bad, just steady.....very much like climbs out in the western United States. SeeMore and I love climbing because time slows down. Dustin and I got to continue our visit, but Greg rode mostly ahead of us. SeeMore only goes one speed up hill, and I was surprised that Greg wasn't even further ahead of us. Greg was not without companionship though, a husband and wife team had a long conversation with him as they all rode together up towards Savage Tunnel. Except for a brave few, the trail was void of cyclist and even wild life. Greg saw a flock of turkeys, and Dustin and I saw a turkey in full flight, which is such a bizarre sight.

The rain stayed away until we saw the Meyersdale train station. We then packed every thing out of the weather, and walked down to the "Take Six" for a late lunch (it was 3:00). All of us eating and pretending the tour wasn't over. We then walked up to the Creamery Stop, where Dustin finished off a large brownie sundae. Back at the vehicles we pretended that the riding wasn't over, but we finally caved in. Knowing that I wasn't going to be able to share a beer with Greg, or share time with Dustin....for a little bit....made the ending bittersweet.