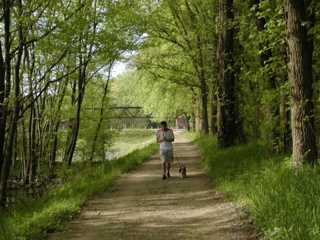 Last day on the C&O started off at lock 31 with Katelyn as my stoker. Sunshine was abundant, and so were the wildflowers! We saw deer, red tail hawks, heron, egret, turkey buzzards, and Kate and I spotted a very large brown barn owl! Mary took over the stoker position at White's ferry. This part of the trip was mud puddle filled, but very enjoyable. Mary's leg felt very good. Not 100 percent, but close. We stopped three times for some stretching, and made it into Great Falls Tavern Visitor center where Kate and Dustin (and 4 bus loads of elementary school students) greeted us. We had lunch and Dustin and I headed out for the last 14.5 miles into Washington D.C. At milepost 13 you have to carry your bike around some rocky terrain, but after that it was smooth sailing into Georgetown. We took our time, and I enjoyed the last few miles. I was sad that this part of the journey was over, but glad that I was able to share so much time with three great riding partners. They are finishing the trails end at Georgetown and from the looks of it, they will be at it for a couple of years.

Kate and Mary found a parking space under the overpass where we joined her. Very proud of their navigation skills in the city. Perhaps their overconfidence led to a major misdirection as we began heading south out of the city, and accidentially got on route 110 south. Totally missing the sign that said "six wheeled vehicles prohibited". This is a restricted area, where only cars are allowed. Vehicles with 6 wheels are not allowed to drive passed the entrance to the Pentagon. There are no signs, and we had no idea. We were trying to get near Mount Vernon to camp for the night at Pohick Bay Regional Park. We were stopped and pulled over by a Virginia State Police Trooper near the entrance of the Pentagon's main entrance. He asked for my license and registration and told me that we were not allowed on Route 110 (we thought we were on 395 to boot) with 6 wheels. I was asked a number of questions, photographed, and then had to wait (while Mary counted the other 6 wheeled vehilces passing us, 3 buses and a dump truck?) until 2 other State troopers came with a bomb sniffing dog. We were asked to step out of the camper while the dog went to work. Sammie was a little miffed so the trooper had to move us a little further away while the sniffer dog did his thing. We must have passed the test (Proof that Dustin's Stinky socks are not a bio hazard) because we were escorted past the Pentagon by our not so friendly State Trooper to route 395. After that excitement, it took us about 2 hours to travel about 15 miles. We were caught in the exciting D.C. traffic, and encircled the campground because BOTH camping books gave false directions which was a good thing as the directorys put the campground right outside of the Lorton Reformatory which Katelyn was not too thrilled about.. At one point, I was within 2 miles of it, without even knowing. It's a GREAT campground. We will be here 2 nights at a total of $40 for both nights. The showers are hot, and there is plenty of spacious wooded sites with many open spaces. 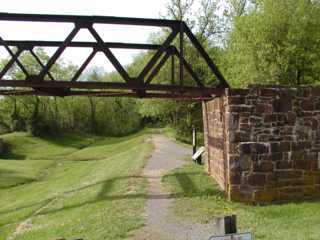 Posted in Pittsburgh to Mount Vernon |