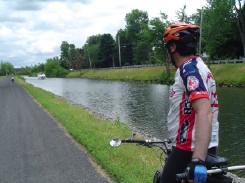 Last night we put raincoats on and walked the town of Chambly. Found a bike store, and had some GREAT pizza at Marvis. Watched some of the boats go in and out of the locks. Got wet, but had a fun time. Some shops were closed, some were opened which was pretty normal for Quebec (so we were told). We had a semi good night sleep at the Mote Mon Repos hotel in Chambly. The Canadians were celebrating their Independence Day in the room next door until 2:00 am. Sounded like they were bowling and watching a bull fight at the same time. I watched a French movie dubbed in English at the bottom of the screen for us Americans. It was about a girl (woman of 28) who loved her bike and loved to ride. She kept her bike inside at night, in the bathtub. It was a great movie if you're a biking fan. Woke up around 8:00 and took Clyde out of the garage. He probably saw the movie also because he showed his displeasure of being in a cold garage with a flat rear tire. When I patched it yesterday, I knew it wouldn't last. I replaced the tube and at 9:00 went to the bike store, Velo Chambly, which is located near the canal. Had them fill the rear with air, purchased another spare tube and a couple of CO2 cartridges. They were very nice people (their prices were a tad high even in Canadian), but they are handy. I think the saying is "location, location, location". We asked them if many bikers come in the shop on their journey around the lake. They said that we were the first that they heard off. After we got our stuff, we put Clyde back together, apologized again for keeping him in the garage, and gave him a bath and some fresh chain lube. We were off, but after .2 miles we stopped and had a 45-minute leisurely breakfast. Our riding day began at 11:00 by going back down the canal bikeway. There was a crosswind today, all day. Sometimes it became a head wind, but the path was dry and the skies were blue. If you follow the instruction on www.champlainbikeways.org page it tells you to pass through a Propriete Privee signs on the canal bikeway. There are none, so don't worry about them. We love the trail, and stopped and boat watched. Many people on the bike/canal trail. Half of Quebec took yesterday off for Independence Day, the other took today off. After the bikeway we traveled on route 223. This is both route 225 and 223 and they are not in the best of shapes. We took a couple of "hinny breaks". The difference between yesterday's rte 225 and today's 223 is there was a lot more traffic today, and 223 has very little shoulder. We stopped by a little cafe for a 'hinny break' and a cool drink. Mary ordered a cup of coffee to go, the waitress spoke little English, and the next thing we knew we were BOTH served with to mugs of regular coffee. So much for that cool drink. We didn't want to appear rude, so we drank the mugs and she did fill our water bottles up "to go". Traveled through the rest of Quebec with the same Midwest feel of yesterday. We pulled up to the border and were 15th in line to cross. It took a while, and when it was finally our turn; we were professionally grilled by a very serious lady guard. We didn't get our little USA pin or refrigerator magnet. The lady was so down to business that we didn't want to show her what the Canadians gave us the previous day. The rest of the ride to Plattsburgh was also flat. When we had the crosswind, we averaged about 15 miles an hour. With the head wind, we pushed about 10. This part of the ride (after the border crossing) brought us many views of the lake and freshly paved, hinny friendly, roads. We had a choice of camping at Champlain Bay State Park, or a semi-new Motel 8. I am sitting here at 5:00 after a nice shower in a big hotel room. Of coarse Clyde is right next to me. We might go swimming in the pool tonight.