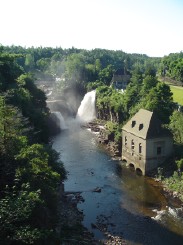 Clyde, B.O.B., Mary, and I slept like rocks! I don't even think we made it to 8:30 pm last night. We had dinner down the road a bit, and came back and read and forgot about the pool. We were up early and out the doors at 7:00 am. We rode through Plattsburgh following route 9. It was under construction and really torn up while it passed the "old" Plattsburgh Air Force Base. Saw many beautiful houses. Outside of Plattsburgh was our first climb that brought us to the Ausable Chasm. We took a break and enjoyed the chasm and waterfalls. That hill was a sign of things to come. No more flat ground riding. With the hills, however, came more beauty. We stopped at McLeans in Keeseville for breakfast. The small parking lot was packed because they serve good food, hot, fast, and at a very good price. I saw peanut butter pie on the menu, and had a piece after my omelet. Both Mary and I were STUFFED! From Keeseville, we followed route 22 for the rest of the day. On the Vermont side, there were plenty of signs for Champlain bike route. However, in Quebec we used the webpage for guidance. In New York we just did what we felt like. We went through an eight-mile stretch that passed us through Lynch, Rattlesnake, and Sugarloaf mountains. On a long down hill Mary allowed Clyde and me to go free. We hit a top speed of over 41 mph. WHeeeeeeeee!!!! We had lunch at Westport at Ernie's (a little grocery store). We both had Italian cold cut wraps and shared half of a cookie; again, we were stuffed. It seems we have been eating very well on this trip. We decide to go beyond Westport to the next town of Port Henry. Port Henry has a wicked hill on both sides of the town, but the one on north side is a bear. We stopped at Bulwagga Bay Camground (I think they misspelled the name on the receipt). Called home and found out that our daughter Katelyn was sick. Sounded like strep throat. Dustin was going to take her to the walk in clinic. The private campground is located next to a waste treatment plant, but we are far away from it. As I sit here at the picnic table, I can see the lake. We plan on walking in to town for dinner, and waiting for phone calls with news. The campground is full, and it has no rhyme or reason to its layout. We are not fans of the campground, but we don't know how far the next stay might be so we are staying put.