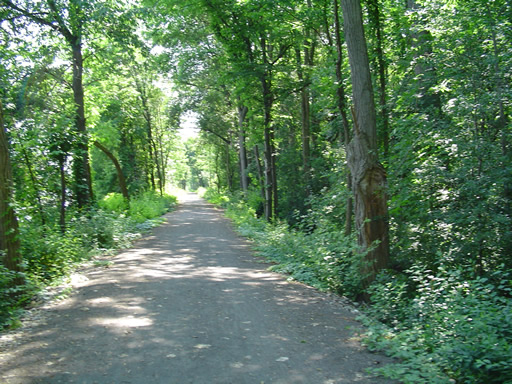 The day started out ominously. For these first 3 days, the weather men, my mom, and our son and daughter have been warning us of serious thunderstorms, hence the hotel living. We did not see a lick of rain today, but it looked threatening all day. The really storm was on this laptop. Windows XP wanted to install a huge update, and knowing how important it is to keep updated, I hit the install button. 45 minutes later I was ready to toss the laptop out the window and watch it break into a thousand pieces. Things improved after I finally got to close the cover to the laptop. We had breakfast up the hill at Katrina's CafÈ. The Rear Admiral had her lumberjack special (2 eggs 1 pancake 2 bacon) and I had three pancakes with peanut butter on top (this set us back a whole $7.00!). Might sound kind of funny, but the peanut butter helps to elongate the digestion of the pancakes.

We left the hotel and were immediately greeted by 15 fellow cyclists who were journeying from Buffalo to Albany, following the Erie Canal. We traded war stories and trail news. It was great to talk to them. We head out on Route 5s, which is a NY designated bicycle route and also a 4 lane highway all the way into Utica (thank you very much). We felt very safe, but the noise made the bike riding less then ideal. We played the Alphabet game as we got closer to Utica, and I beat the Real Admiral by a Z.

We screwed up Utica, again. One day we will get it down pat and be able to ride through Utica correctly on bicycle friendly routes. We do not know how to get on the beginning of the Canal path in Utica, but we know it's not by going down the major route 8. We did some guardrail hopping, and carried SeeMore and the bags down an embankment to finally get onto the path that runs beside the canal. As soon as we got on the trail, our heart rates went down and our smiles went up. What a treasure it was to ride from Utica to Rome on the trail. We stopped to have oranges and just thank our lucky stars for such a great experience.

We got off the trail in Rome and had lunch at a small diner. After lunch we went down ANOTHER major 4-lane highway (yes, this is ALSO a NY designated bicycle route) for about 10 miles. Turning onto Route 31 and following Lake Oneida's southern shores, SeeMore decided to turn the horses lose. We had a small headwind, but Mary and I felt really good and we average better than 14 mph for almost 25 miles. We were watching the lake, looking at people's homes, and just enjoying the day!

We are hold up in the Seneca hotel in Cicero. This is not your typical 3 star hotel, we don't think the owners know about the star ratings. It cost us $52.50 for tonights lodging. $50.00 (cash) for the room, and $2.50 for the Febreeze air refresher we purchased at Wal-Mart to try a get rid of the cigarette smell in our room. 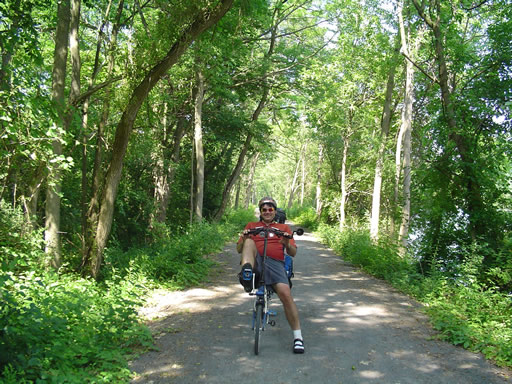